We will discuss pointers here. Playing with pointers in C is really fun but pay a little more attention in this chapter because pointers are considered to be the toughest part of the C.

Now, let's again have a look at the following declaration:

Address of 'a' is an integer which is something like 9562628. It will vary for every computer as per memory given to 'a' at that time. 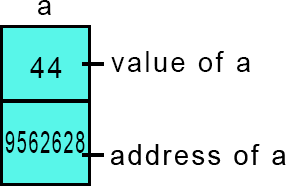 Address in C is represented as &a, read as address of a. Remember that all the time when we were taking value of variable using scanf, we were taking an input from user and storing it at the address of that variable.

How to Use Pointers?

You must be enjoying programming in C, and will do even more now. Till now, we have just seen what is a pointer. So, let's introduce pointer in our program.

int *b → This statement should mean that '*b' is an integer but then what is significance of '*' before 'b'? It means that b points to some integer ('b' is a pointer to some integer).

Or we can say that 'b' will store the address of some integer.

Swapping means to interchange the values.
void swap( int *a, int *b ) → It means our function 'swap' is taking two pointers as argument. So, while calling this function, we will have to pass the address of two integers (call by reference).

In normal function call (call by value), the parameters of a function are xerox copies of the arguments passed to the function. It is like we are passing xerox copies.

So altering them won't affect the real values

But in call by referance, we pass the address of variables to the function. Passing address is like passing original 'x' and 'y'.

Altering the parameters will alter the real values also.

Let's see a normal function call (passing values and not addresses) and try to alter the value of the variable.

If you have any confusion left, then just go through the above two codes again and you will understand it. If you are still confused, then you can always raise your doubts in the discussion section.

We also have pointers to array which we will see in the next topic Array.

Before moving to the next topic, practice a lot of problems on pointers so that you have a strong grip over it.

To learn from simple videos, you can always look at our C++ video course on CodesDope Pro. It has over 750 practice questions and over 200 solved examples.
Don't worry about failure. You only have to be right once.
- Drew Houston
PREV NEXT
# Further Readings
CODESDOPE PRO
It's
Simple and Conceptual
with Chance for Internship*
C++ in English
Launched
Get C++ (English) course for 999
Pro Course Features
Simple Videos
Questions to Practice
Solved Examples
Internship Chance*
Certificate of Completion
Discussion with Experts
Learn for FREE
We're Hiring
Campus Ambassadors
Register