Growth of a Function

Even with these approximations, we will be able to know about the rate of the growth of our function and this is enough information to keep in our mind while developing an algorithm.

As you know our main discussion is going to be about the rate of the growth of the function, there are some notations for the same which we are going to study further.

Notations for the Growth of a Function

There are some notations which we frequently use to represent the performance of an algorithm. Let's have a look at these notations.

As per the definition,

So, what this equation basically means? It means that if we are writing $f(n) = O(g(n))$ then we are telling that $g(n)$ is the upper bound of $f(n)$ and there are some positive values of $c$ and $n_o$ for which the function $f(n)$ is always less than or equal to the function $c.g(n)$ for all $n\ge n_o$. Let's look at the graph below to make it more clear. 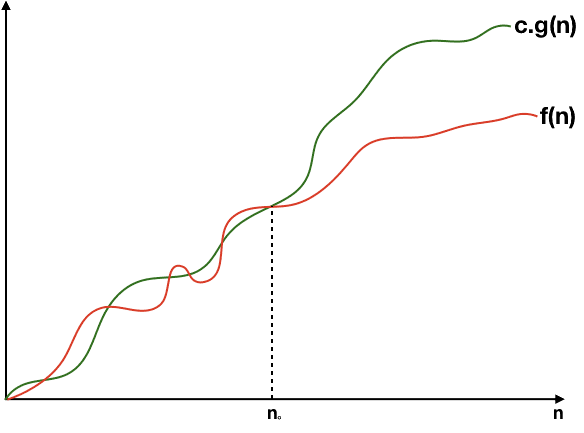 From the above figure, you can see that the function $f(n)$ is always less than or equal to the function $g(n)$ for any $n\ge n_o$. Also, the restriction is not applied to the region of $n\le n_o$.

Let's have a look at some examples.

Feel free to discuss your queries in the Discussion Section.

As now you have understood the meaning of the $O$-notation, let's discuss the significance of it and when it is used. 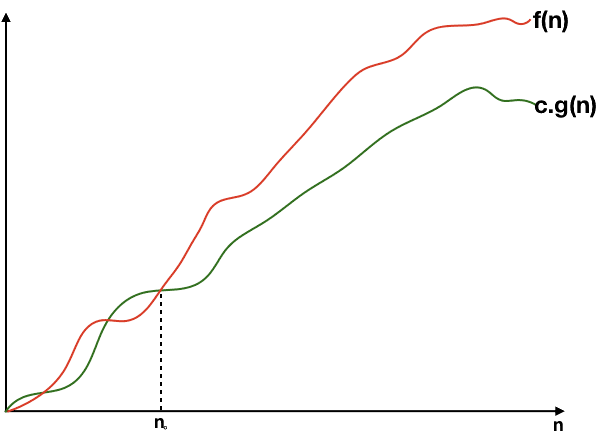 Similar to the $O$, we are not claiming anything about $n\lt n_o$ and all values of $c$ but we are saying that there exist at least one positive value of $c$ and $n_o$ each for which our condition is satisfied.

Let's look at some examples of $\Omega$.

The $\Theta$ (pronounced as big-theta) is used to represent the tight bound of a function. So, according to the definition,

In this case, the function $f(n)$ is sandwiched between the functions $c_1g(n)$ and $c_2g(n)$. Let's have a look at the graphical representation of the same. 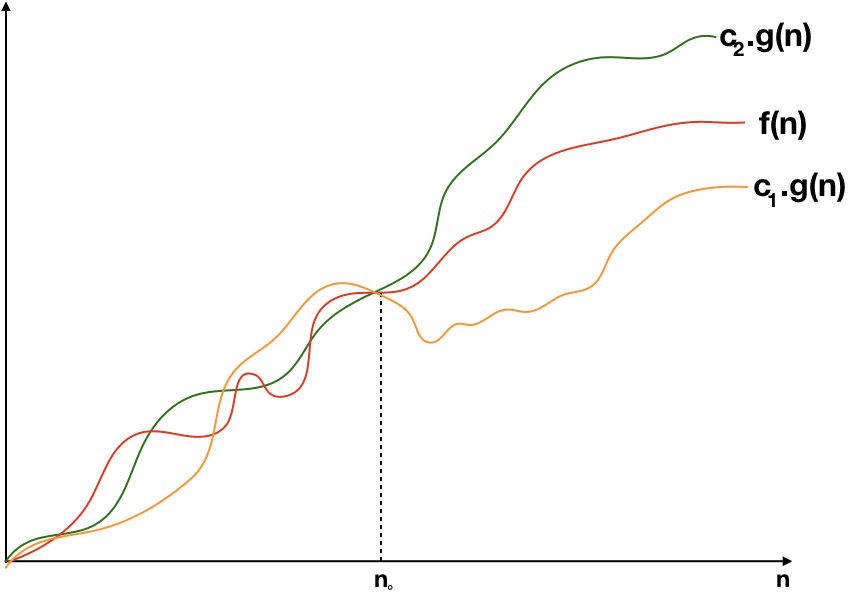 Let's look at some examples.

You can always choose a different way to proceed with these kinds of problems. The value of constants ($c_1$, $c_2$ and $n_o$) will differ according to your choice.
While writing an algorithm, we mainly focus on the worst case because it gives us an upper bound and a guarantee that our algorithm will never perform worse than that. Also, for most of the practical cases, average case is close to the worst case.

A faster growing algorithm dominates a slower growing one.

Commonly Used Functions and Their Comparison

The growth rate can easily be seen from the graph given below.

Since we always want to keep the rate of the growth as low as possible, we try to make an algorithm to follow the function with least growth rate to accomplish a task.

Let's analyze the two cost functions we derived in the previous chapter.

With the knowledge of this chapter, we can easily say that the first equation ($C_1$) is $O(n^2)$ and the second equation($C_2$) is $O(n)$ or $\Theta(n^2)$ and $\Theta(n)$ respectively, to be more precise. So, now you have seen how we analyze any algorithm from start. First, we derived the cost function of the algorithm we have written and then from this cost function, we obtained the required information.

Now, you know how to analyze an algorithm and the notations used in it. In next chapters, we are going to do the analysis of more algorithms.