We are going to use Binary Tree and Minimum Priority Queue in this chapter. You can learn these from the linked chapters if you are not familiar with these.

Huffman code is a data compression algorithm which uses the greedy technique for its implementation. The algorithm is based on the frequency of the characters appearing in a file.

We know that our files are stored as binary code in a computer and each character of the file is assigned a binary character code and normally, these character codes are of fixed length for different characters. For example, if we assign 'a' as 000 and 'b' as 001, the length of the codeword for both the characters are fixed i.e., both 'a' and 'b' are taking 3 bits.

Since characters which have high frequency has lower length, they take less space and save the space required to store the file. Let's take an example.

Also, the Huffman code is a lossless compression technique. You can see that we are not losing any information, we are just using a different way to represent each character.

One general doubt which comes here while reading this is "why we are using longer length codeword for characters which have less frequency, can't we use a shorter length for them too? E.g.- couldn't we use code of 3-bit long code to represent 'c' instead of 4?".

The answer is no and this is due to the prefix code. We are going to discuss prefix code in a while but let's first discuss how storing, encoding and decoding is done.

Now, we can't use any specific length which can separate our character if we are using variable length codeword and to simplify decoding the codeword back to characters, we use prefix codes.

Using prefix codes made decoding unambiguous. In the above example, we have used 0, 111 and 1100 for 'a', 'b' and 'c' respectively. None of the code is the prefix of any other codes and thus any combination of these codes will decode into unique value. For example, if we write 01111100, it will uniquely decode into 'abc' only. Give it a try and try to decode it into something else.

Now, we know what is Huffman code and how it works. Let's now focus on how to use it.

Let's first look at the binary tree given below.

One thing to notice here is that all the characters are on the leaves of the tree and to get the codeword for any character, we start from the root of the tree and proceed to that character. Now, if we move right from any node, we interpret that movement as 1 and if left, then 0. This is also indicated on the branch of the binary tree in the picture given above. So, we move from root to the leaf containing that character and combining the 0s and 1s of each movement, we get the codeword of the character. This is described in the picture given below.

In this way, we can get the code of each character. 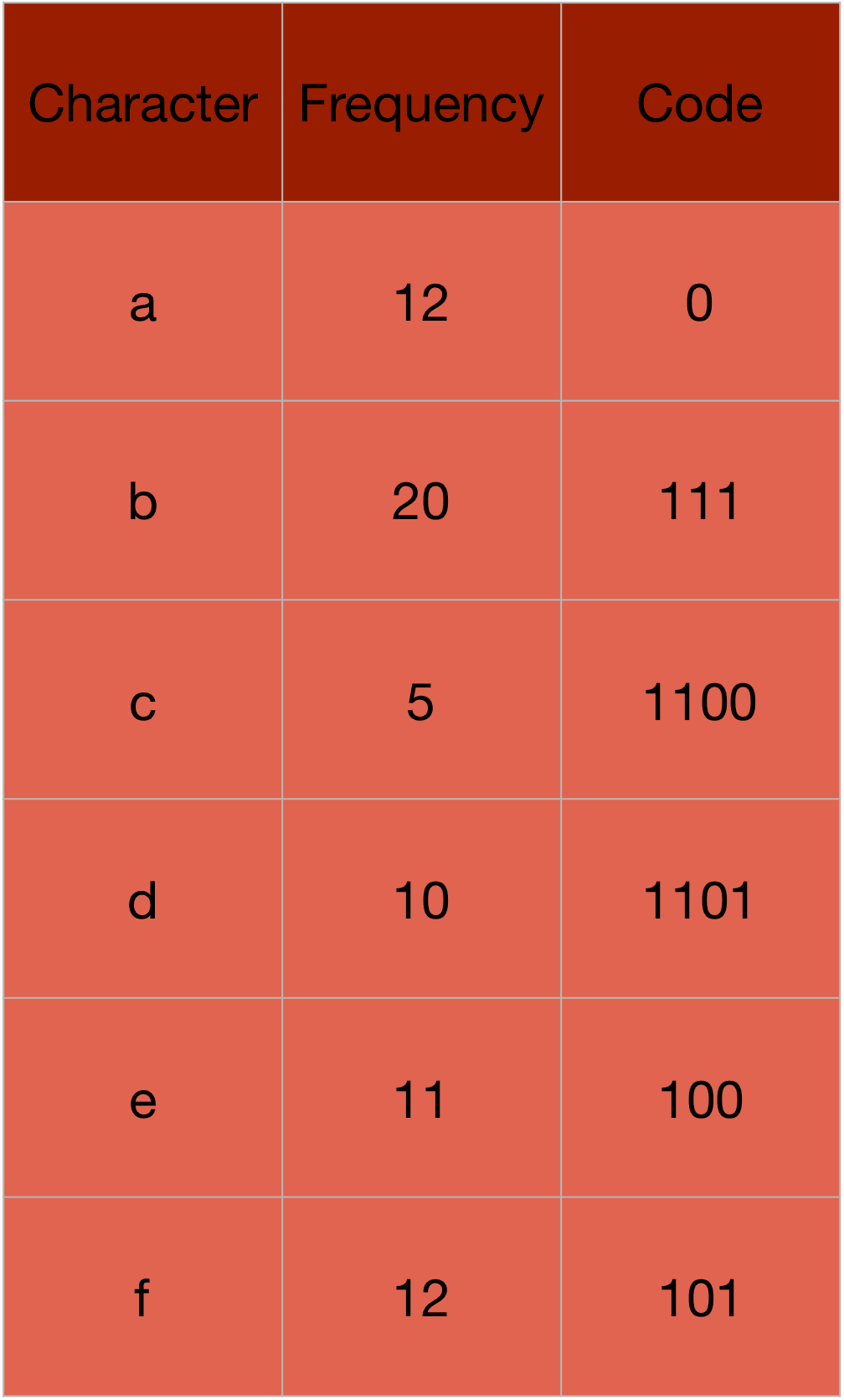 We will start from the root and since the first number is 0, so we will move left. By moving left, we encountered a character 'a' and thus the first character is a.

Now, we will again start from the root, we have 1 in the code, so we will move right.

Since we have not reached any of the leaves, we will continue it. The next number is also 1 and so we will again move right.

Still, we have not reached the leaf, so continuing, the next number is also 1. Moving right this time will give us the character 'b'. Thus, 'ab' is the string we have decoded till now.

Similarly, again starting from the root and moving for the next numbers will make us reach 'c'. 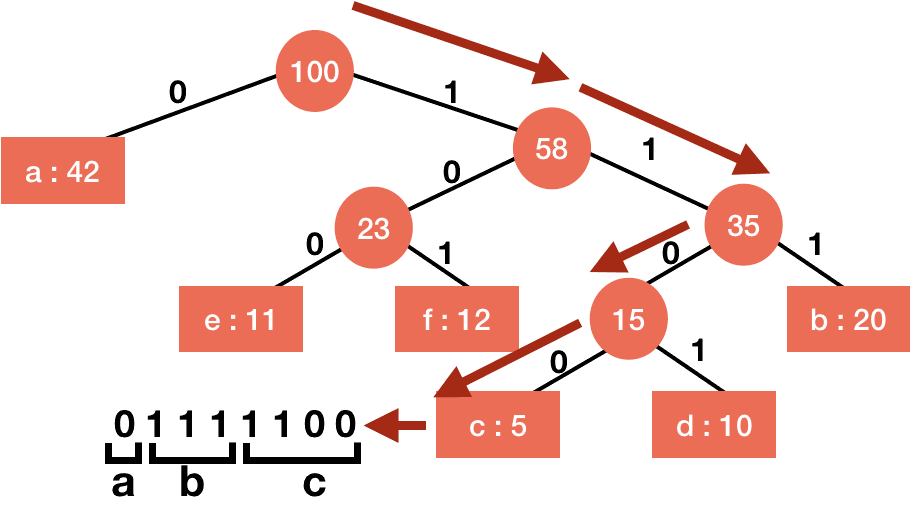 We now know how to decode for Huffman code. Let's look at the encoding process now.

Now, our next task is to create this binary tree for the frequencies we have.

This is the part where we use the greedy strategy. Basically, we have to assign shorter code to the character with higher frequency and vice-versa. We can do this in different ways and that will result in different trees, but a full binary tree (a tree in which every node has 2 children, except the leaves) gives us the optimal code i.e., using that code will save the maximum space in storing the file.

To construct this tree for optimal prefix code, Huffman invented a greedy algorithm which we are going to use for the construction of the tree.

We start by sorting the characters according to their frequencies.

We again sort the nodes according to the values and repeat the same process with the first two nodes.

In this way, we construct the tree for optimal prefix code.

We can sum all these for each character to get the total number of bits used to store the file. $$ \text{Total bits} = \sum_{i}d_i*i.freq $$

Now, we know how to construct the tree from their frequencies and then use that tree to know the prefix codes of characters and how to encode and decode. So, let's see the coding implementation for the construction of the tree.

In the steps of constructing the tree, we can see that we are continuously using the sorted nodes and using the first two elements from it. This feature will be well taken care of if we use minimum priority queue because just by inserting a new node, it will go to a position where the nodes will be in the sorted order and also extracting from a minimum priority queue will give us the nodes with least values first.

Our next task is to make a minimum priority queue using these nodes.

Minimum priority queue will automatically add these nodes in a position such that they are in the sorted order.

Now, we need to extract the first element from the queue and set it as the left child of a new node.

Similarly, we need to set the right child of this new node to the element we will extract next.

Now, the value of this new node will be the summation of the values of its children.

After this, our queue and the node z will like this:

Our next task is to insert this node in the queue. Since the queue is a minimum priority queue, it will add the node to a position where the queue will remain sorted.

We need to repeat this process until the length of min_queue becomes 1 i.e., only the root is stored in the queue. 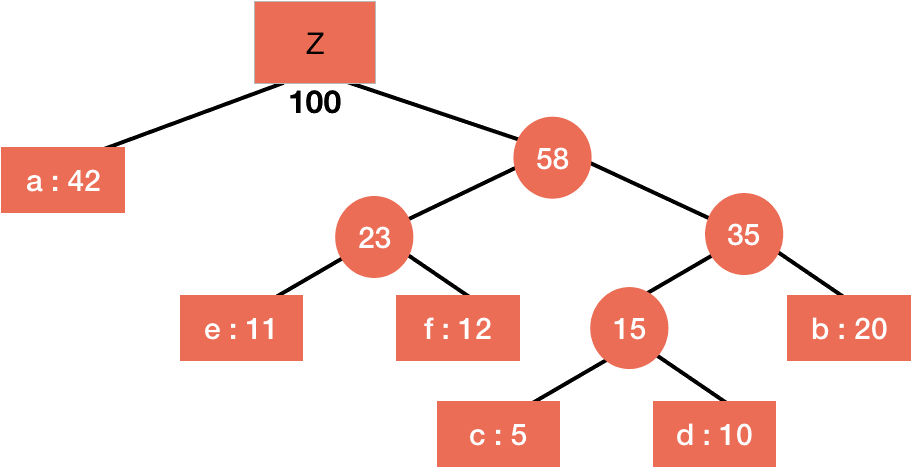 Also, we are extracting two nodes and adding one node to the queue in each step, thus making an iteration from 1 to n-1 to achieve the same.

At last, we will extract the root of the tree from the queue and return it.

Now, we know that each operation is taking $O(\lg{n})$ time and we have already discussed that there are a total of n-1 iterations. Thus, the total running time of the algorithm will be $O(n\lg{n})$.