We have seen graphs and we know about trees (or you can read about them in this chapter). Thus, we can say that a tree is also a special type of connected graph which has no cycles and self-loops. 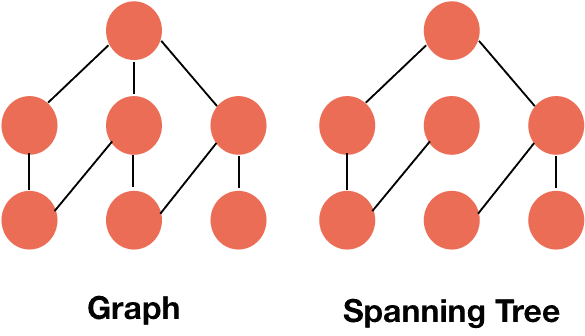 We can connect n vertices with a minimum of n-1 edges, so a spanning tree with n vertices has exactly n-1 edges. 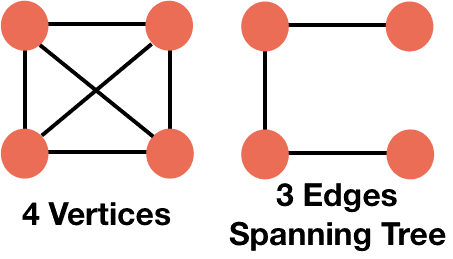 A minimum spanning tree or MST is a spanning tree of an undirected and weighted graph such that the total weight of all the edges in the tree is minimum.

A minimum spanning tree is used in many practical applications. For example, think of providing electricity to n houses. To do this, we need to connect all these houses with wires. Suppose the wires are going along the roads of the locality, so the length of the roads are weights to the graph containing houses as vertices and roads as edges. Now, the minimum spanning tree would provide us the path to connect all these houses with the least length of wires and thus, minimizing the cost.

We are going to learn two algorithms - Kruskal's algorithm and Prim's algorithm in this course. But let's first go through some terms which are frequently used.

Cut → A cut is a partition in a graph which divides a graph into non-empty sets. 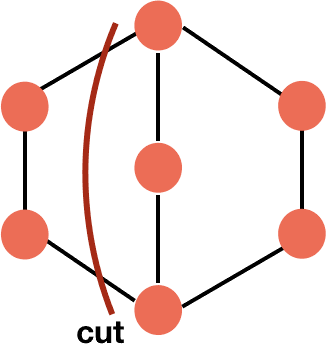 Cross → A edge is said to cross the cut if one of its ends is in the one partition and the other end is in another partition. 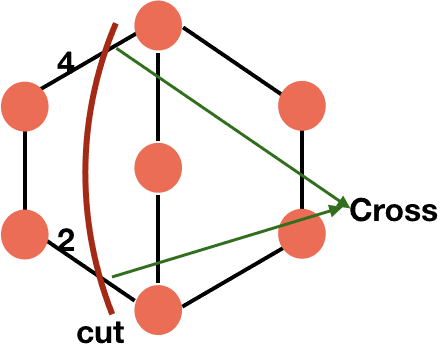 Light Edge → Among all the edges crossing a cut, the light edge is the one with the minimum weight. 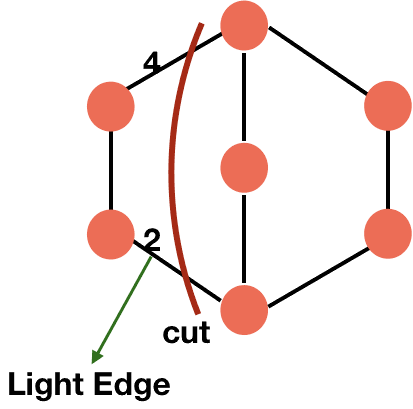 Respect → A cut respects a set of edges if no edge from the set crosses it. 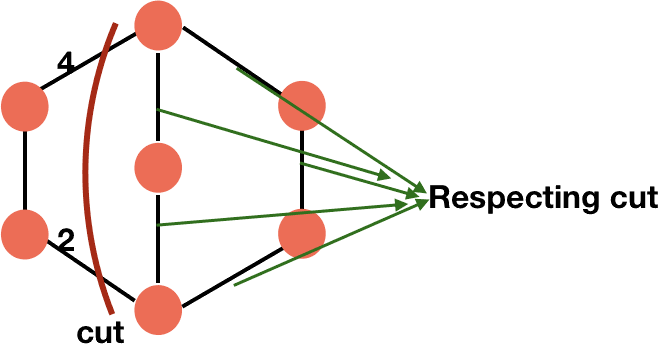 Among all the crossing edges of a cut, the light edge is in the minimum spanning tree (or MST).

We can easily verify this result. Among the two sets of the partitions given to us, there must be an edge from all the crossing edges to connect both sets so that we can span all the edges and choosing the light edge will serve the purpose of a minimum spanning tree.

Let's start learning the Kruskal's algorithm to get the minimum spanning tree from a graph. We will learn Prim's algorithm in the next chapter.

Let's take an example to understand this procedure. 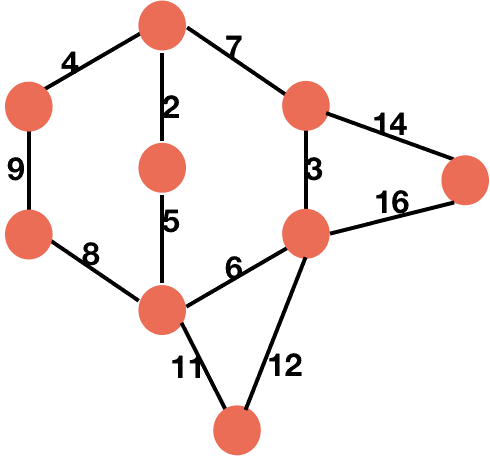 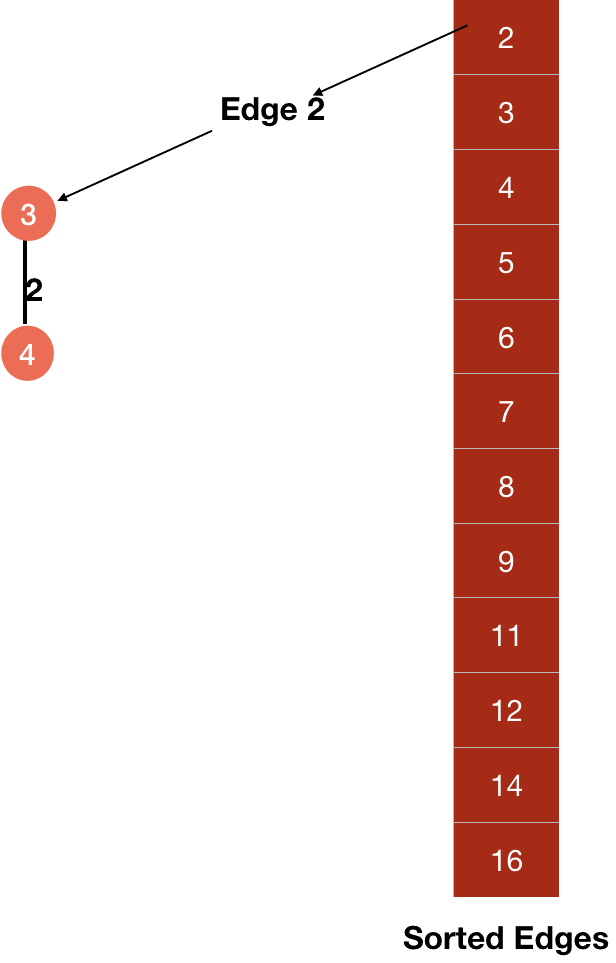 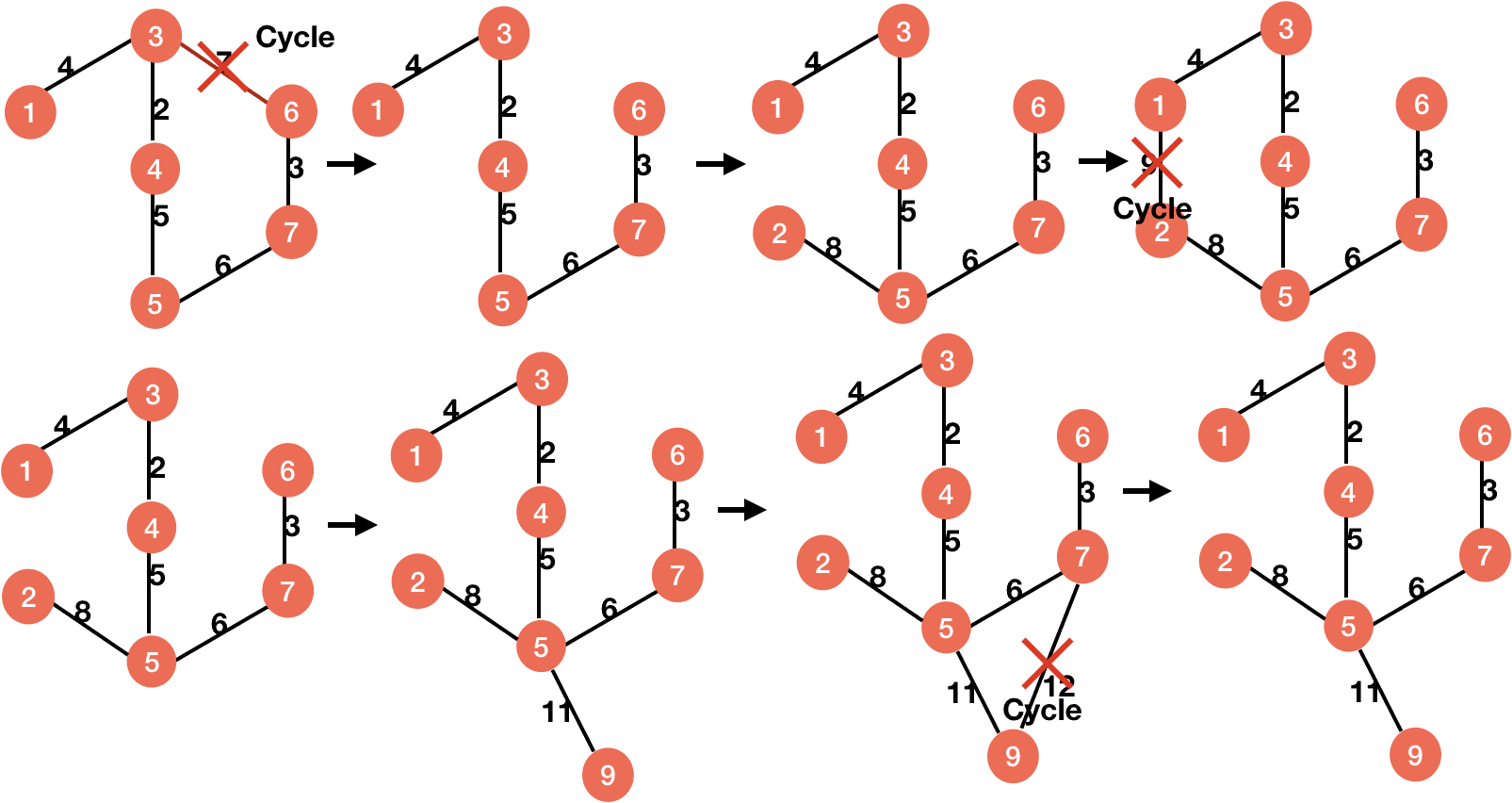 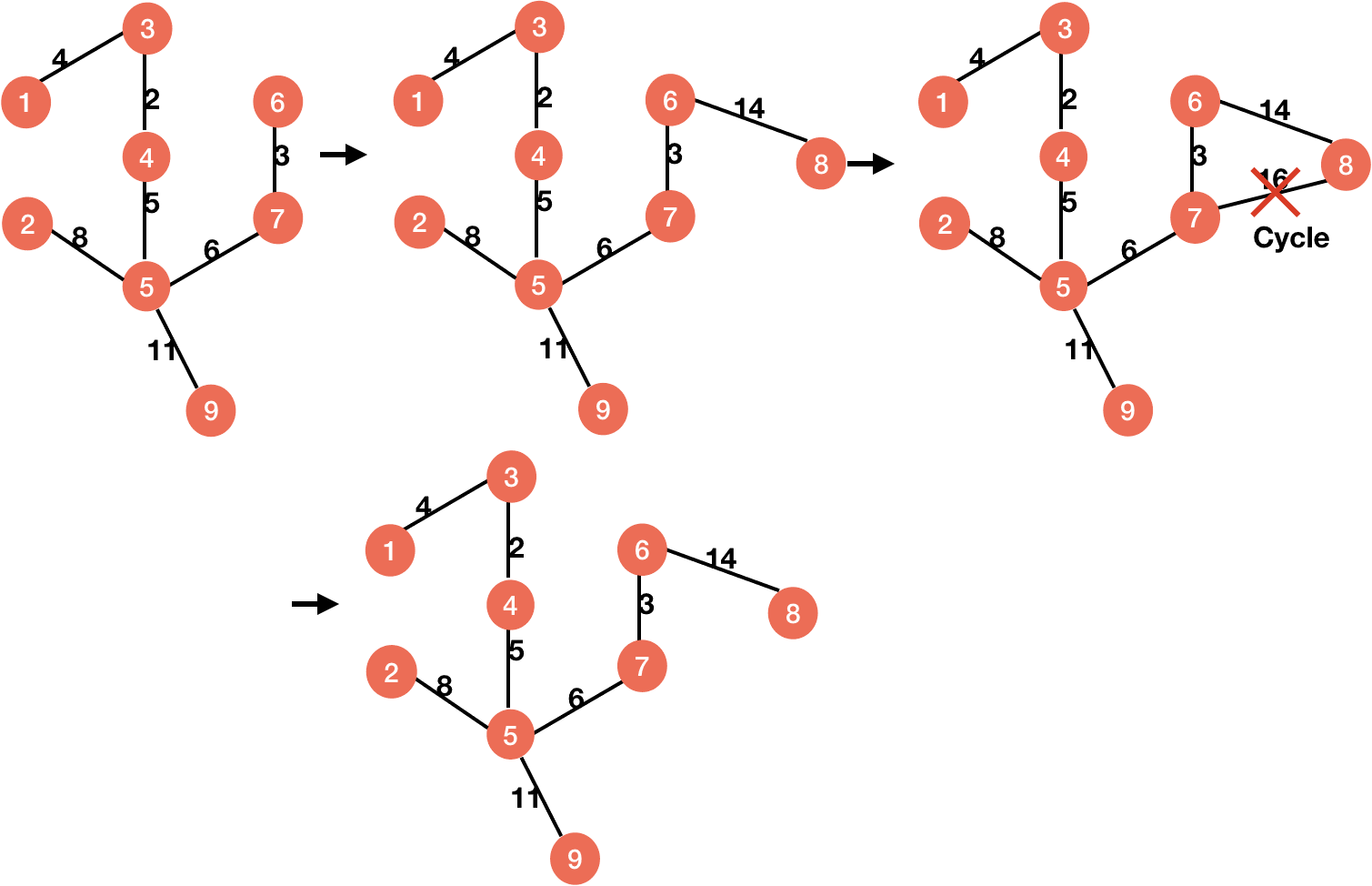 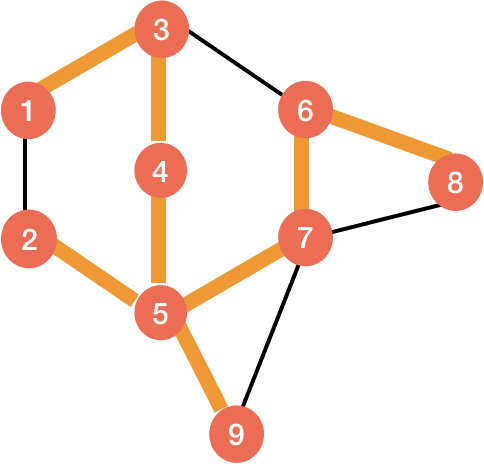 Let's first check if the Kruskal's algorithm is giving a spanning tree or not. The tree we are getting is acyclic because in the entire algorithm, we are avoiding cycles.

The last property we need to check to prove that the algorithm yields a spanning tree is that the tree we are getting is connected.

Let T be the spanning tree we got from our algorithm and T* is the minimum spanning tree. If T and T* are not equal, then there must be an edge in the tree T* from the edges which we have rejected while forming T (because they were forming loops) because of their lesser weights. 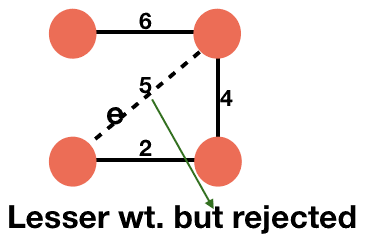 Let say this edge is e, and if we have taken this edge we would have formed a cycle. Also because our algorithm takes the edges with fewer weights first, so all the edges of this cycle must be less than the weight of e. 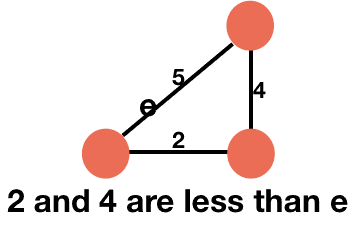 Let's say f is some edge of this cycle which is not in T* because T* has the edge e and doesn't for any cycle (as it is MST). Also the edge f is appearing before the edge e in the cycle, so its weight must be less than that of e (our algorithm adds edges with less weight first). 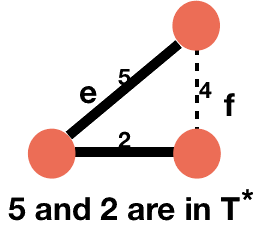 Let's consider a tree T2 which includes all the edges of the tree T except the edge f and includes e instead of it. Thus, T2 is closer to the tree T* because T* also has the edge e instead of f.

Now we know how Kruskal's algorithm works and we have also seen the proof of its correctness. Let's look at the code to implement the algorithm in a program.

We can implement the Kruskal's algorithms in many different ways. We need to start by sorting all the edges according to their edges and then we just have to iterate over them and construct our MST by checking for cycles in MST before including them.

The present is theirs; the future, for which I really worked, is mine.
- Nikola Tesla
PREV NEXT
CODESDOPE PRO
It's
Simple and Conceptual
with Chance for Internship*
C++ in English
Launched
Get C++ (English) course for 999
Pro Course Features
Simple Videos
Questions to Practice
Solved Examples
Internship Chance*
Certificate of Completion
Discussion with Experts
Learn for FREE
We're Hiring
Campus Ambassadors
Register