Quicksort is another sorting algorithm which uses Divide and Conquer for its implementation. Quicksort is also the practical choice of algorithm for sorting because of its good performance in the average case which is $\Theta(n\lg{n})$. Unlike the Merge Sort, Quicksort doesn't use any extra array in its sorting process and even if its average case is same as that of the Merge Sort, the hidden factors of $\Theta(n\lg{n})$ are generally smaller in the case of Quicksort.

So, Quicksort sounds like the perfect sorting algorithm we always needed, but hold on for a second, Quicksort is also not as perfect as it sounds. In the worst case, Quicksort gives us a quadratic ($O(n^2)$) performance which might be concerning in many cases. So, let's move forward and discuss in detail about Quicksort.

This partitioning process is repeated on the smaller subarrays and hence finally results in a sorted array.

So, let's first focus on making the partition function. 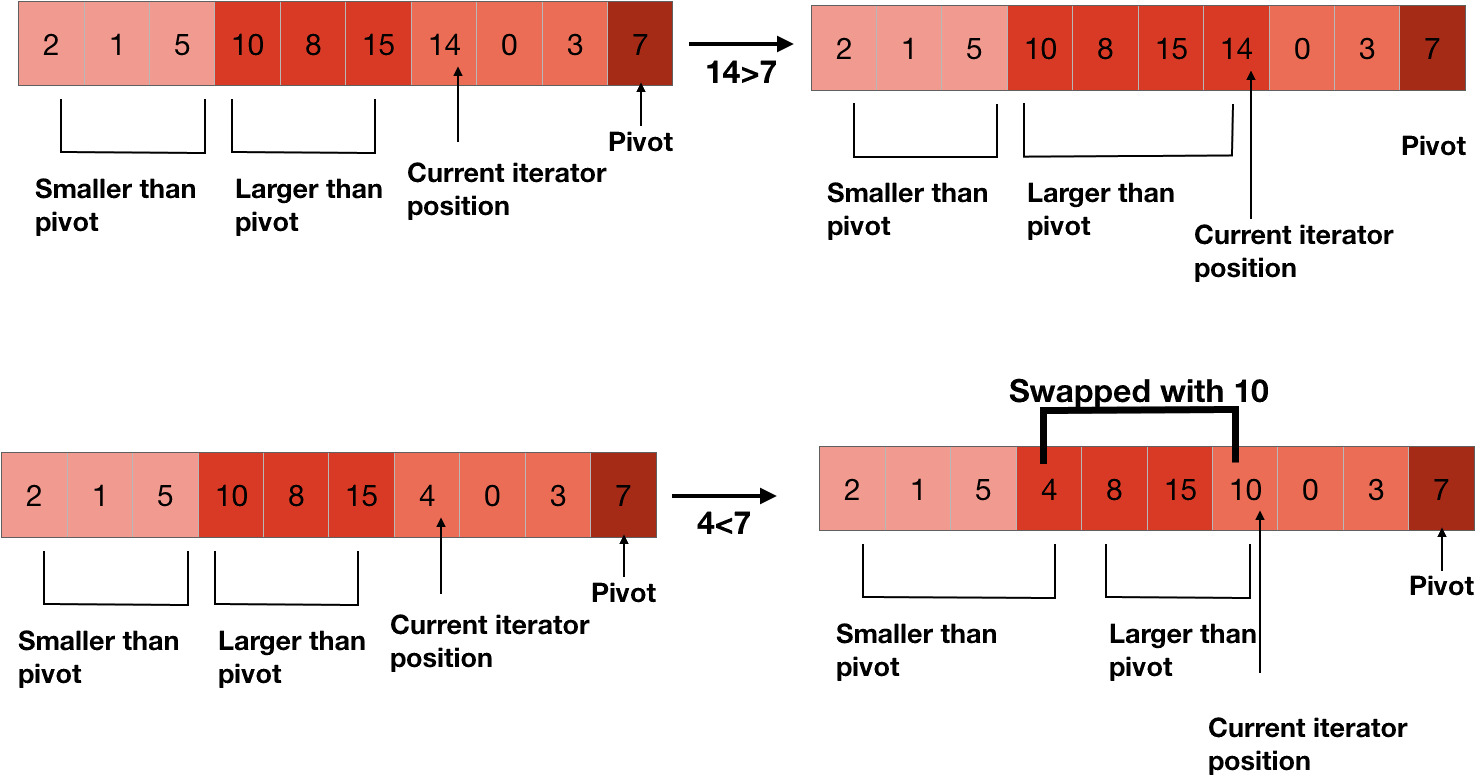 At last, we will swap the pivot with the first element of the cluster of the larger elements.

Thus, we have successfully done the partition of the array. So, let's write the code for the same.

Code for Partition in Quicksort

The next task is to make the pivot element. In our case, it is the last element i.e., pivot = A[end].

Initially, we will start our iteration by setting this pointer outside our array i.e., i = start-1 and this pointer will always point to the last element of the cluster of the smaller elements.

Whenever we will have a need to swap the elements, we will increase its value to point the first element of the cluster of the larger elements.

Now, if the condition is true i.e., the element is smaller than the pivot, then we have to swap it with the first element of the cluster of the larger elements. So, we will increase the value of 'i' by 1 and then do the swapping.

Thus, we are done with making the clusters and the only task left is to swap the pivot with the first element of the cluster of the larger elements.

One last thing we want from our PARTITION function is to return the index of the pivot, so we can then use this index to divide our array further into subarrays.

That's it. We are done with the code to partition an array.

Now we are done with the PARTITION function, so let's focus on repeating it to subarrays.

From the previous two chapters, we already have been applying divide and conquer to break the array into subarrays but we were using the middle element to do so. In quicksort, we will use the index returned by the PARTITION function to do this.

Here also, we will continue breaking the array until the size of the array becomes 1 i.e., until start < end.

So, we will first start by partitioning our array i.e., q = PARTITION(A, start, end). 'q' is storing the index of the pivot here. After this, we will again repeat this process to the subarray from 'start' to 'q-1' and 'q+1' to 'end', leaving the pivot element because that is already in the place.

We have already stated that Quicksort takes $\Theta(n^2)$ time in the worst case and $\Theta(nlg{n})$ in the best case. Let's analyze the above code and confirm these running times.

Now, the total running time of the QUICKSORT function is going to be the summation of the time taken by the PARTITION(A, start, end) and two recursive calls to itself. The comparison (if start < end) is going to take a constant amount of time and thus, we are ignoring it.

Clearly, the PARTITION function is a linear (i.e., $\Theta(n)$) one because there is just one loop which is iterating over the entire array (of size n) and all the other statements are constant time taking processes.

We have already dealt with this same equation many times in this course and know that it is going to take $\Theta(n\lg{n})$ time.

Now, let's take the case when the partition is completely unbalanced every time i.e., each time, one half is of the size $n-1$ and other of size $0$.

In this case, the total running time would be:

Let's take a look at the case when the partition is quite unbalanced and see the running time.

Let's take a look at the recursion tree of the above equation.

Similarly, the right-most branch will reach its base case at last because it has the maximum number of elements in each division.

Also, after the finishing of the left-most branch, the cost at each level will become less than $cn$ as shown in the above picture.

So, we have seen that even in the case of extremely unbalanced partition, the Quicksort results into $\Theta(n\lg{n})$ running time.

Choice of Pivot in Quicksort

In this chapter, for the sake of explaining the concepts, we have always taken the last element of the array as the pivot but think about the case when the input array is sorted or reverse-sorted. In that case, choosing the last element every time will result in partition of sizes n-1 and 0 and thus, will give us a quadratic running time i.e., $\Theta(n^2)$. This will also happen when we will always choose the first element of the array as the pivot. 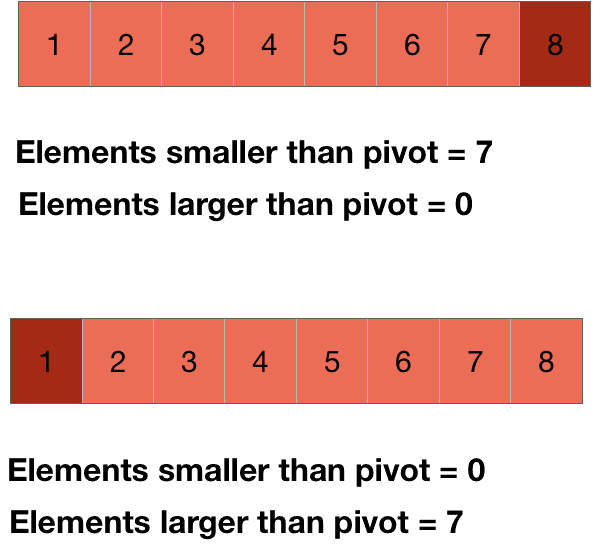 Of course, we have discussed that the probability of occurrence of the worst case is very less and we are not concerned with this. The common problem is the DoS attack when an attacker makes the server resource unavailable for the intended users. So, an attacker can intentionally give such input to the server which will take $\Theta(n^2)$ time and thus make the server busy. The common solution is to pick a random pivot which will make the algorithm fair any input.

This is also the case when one side has n-1 elements and another side has 0 element and thus will take $\Theta(n^2)$ time. We can overcome this problem by choosing 2 pivots and make 3 partitions of the array i.e., one smaller than the pivot, one equal to it and another for elements larger than it.

Choosing 2 pivots also increases the performance of the algorithm. Also, Dual-Pivot Quicksort is the default sorting algorithm in Java because it gives $\Theta(n\lg{n})$ running time for many inputs for which the normal Quicksort goes to $\Theta(n^2)$ time.