So far, we have studied about algorithms and its analysis. Now let's start learning some real algorithms.

But this is not the only reason why we are learning these as our first algorithm. Sorting algorithms are building blocks of many other algorithms i.e., many algorithms emerge from sorting algorithms. Also, many algorithms work on sorted data, so we first need to sort the data, if it is not already sorted, to use such algorithms. In many cases, sorting is not even a necessary part of getting the result of a problem but if the data is sorted then it becomes much easier to find the solution. For example, take a problem of finding two numbers with the smallest difference from a set of numbers. The solution for the problem can be very easily found if we first sort the numbers and then just find the differences between the adjacent numbers and return the smallest number among these differences. 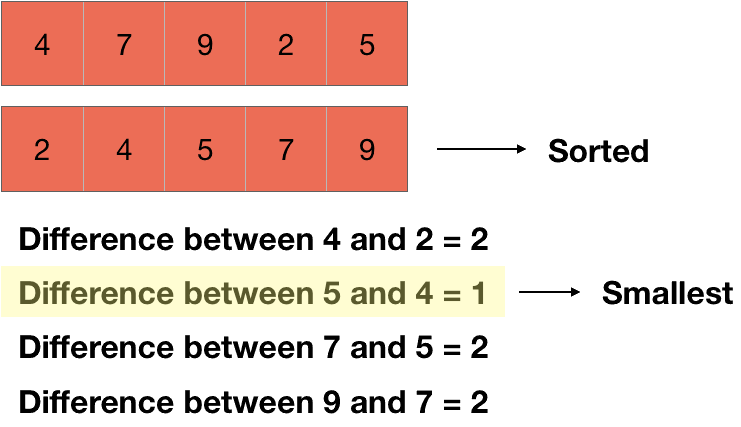 In this section, we are going to learn 4 sorting algorithms - Insertion sort, Bubble sort, Heapsort, and Counting sort. Quicksort and Mergesort are discussed in the further sections.

The first three algorithms (Insertion sort, Bubble sort, and Heapsort) are all comparison sort i.e., they compare numbers to arrange them in order. However, counting sort is a non-comparison sort algorithm i.e., it arranges numbers without comparing them. Interesting, isn't it? So, let's start learning all these algorithms.

Many times we develop an algorithm based on the way we accomplish a given task manually and Insertion sort is also that kind of algorithm. It is similar to sorting by hands. We pick up an element and then place it in the right position. Let's take an example of placing 5 bars in sorted order, with the largest at the bottom.

Let's look at the illustration of insertion sort.

So, the steps of the insertion sort are :-

Now, we know the working of insertion sort and the logic behind it. So, let's see how to convert those logics into code.

The first thing we need to do is to start the iteration, so let's use a for loop for this i.e., for i in 1 to A.length.

Now, we have to compare the current element and the previous element and swap them if they are in the wrong order and this process needs to be repeated (as shown in the above picture). So, let's use another loop to iterate back in the array and do this. while j>1 and a[j-1]>a[j] - Here, 'j' is the current element and the statements of this loop will be executed if the elements are in the wrong order (a[j-1]>a[j]) and we will decrease the value of 'j' to make this loop iterate backward.

So, let's make a working code out of these.

for i in 1 to A.length - We are iterating over the array 'A'. Now, we have to compare the current element a[j] with the adjacent previous element a[j-1] and check whether they are in order or not. This is done by the condition a[j-1] > a[j] of the while loop. If they are not in order, then we are swapping them swap(a[j-1],a[j]), otherwise, the outer for loop will just continue the iteration.

There can be different ways to implement these logics into code. So, you can come up with a different style of code to implement the logic of the insertion sort. And this is the entire point of algorithms, that one should know how to solve a problem and then coding up that solution is a different part.

At the first glance, we can see that there is one loop inside another and rest lines of the codes are going to take constant time, so intuitively we can tell that the algorithm is of $O(n^2)$ but let's analyze the algorithm properly and see if this intuition is correct or not.

The first statement is going to run n+1 times (n times for iterating every element of the array and 1 more time when the condition will be checked and failed). And the statement j=i is going to run n times, every time the outer loop is executed.

In the algorithm of insertion sort, we know that the for loop is going to iterate from 1 to n in any case and it is while loop which is going to execute differently for different inputs. For example, take these two cases.

Now, the best case would be when the while loop will run minimum possible times and it is possible when the condition a[j-1]>a[j] fails every time and this will happen in the case when the array is already sorted because in that case only every j-1th will be smaller than the jth element of the array. 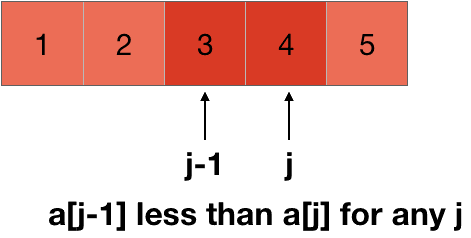 In this case, the value of $t_i$ is going to be 1 for any value of i because every time the statement of while loop will be executed single time and its condition will be failed. Thus, we can write $T(n)$ as:

And the above expression is linear. So, the insertion sort has a linear best case running time i.e., $\Omega(n)$ and this is going to occur when the array is already sorted.

The maximum number of times the while loop will run when the condition of the while loop a[j-1]>a[j] will be satisfied every time. And this means that any j-1th element is greater than the jth element of the array which means that our array is sorted in reverse order. 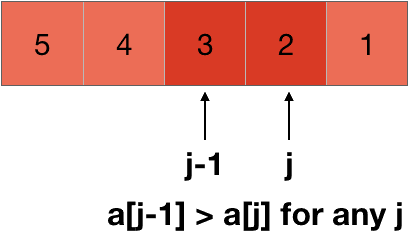 The above equation is a quadratic one, so the insertion sort has a quadratic worst-case running time i.e., $O(n^2)$ when the array is sorted in the reverse order.