Till now, we were writing our codes in the Main method. In this chapter, you will learn to create your own methods. 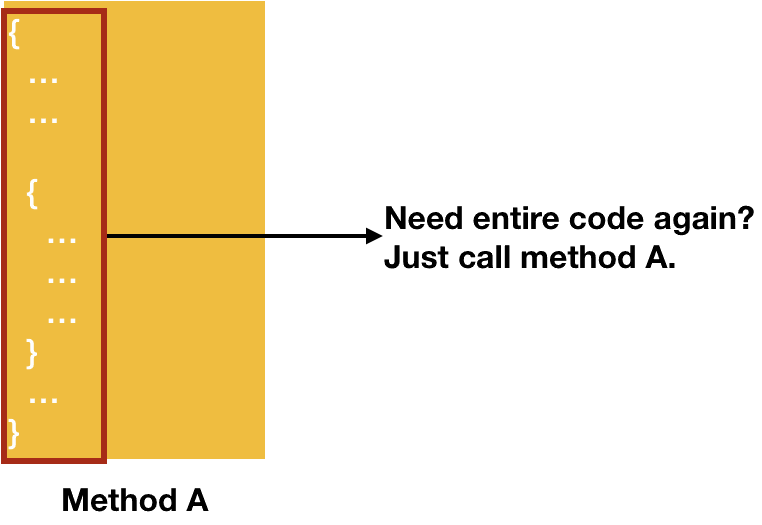 A method is nothing but a group of codes written together and given a name. And these can be called anytime in the Main method without typing the whole code.

Writing methods saves us from writing the same code snippet again and again and also make our code a lot more readable and neat. We have already use predefined methods like WriteLine, ReadLine, Sin, etc. Let's learn to create our own methods.

As an example, suppose we have to calculate the average of 2 numbers, num1 and num2. The numbers are of type integer and average is of type double. Then we will pass the numbers to a method that will return (gives us back) the average value of those numbers. We will declare that method as follows: 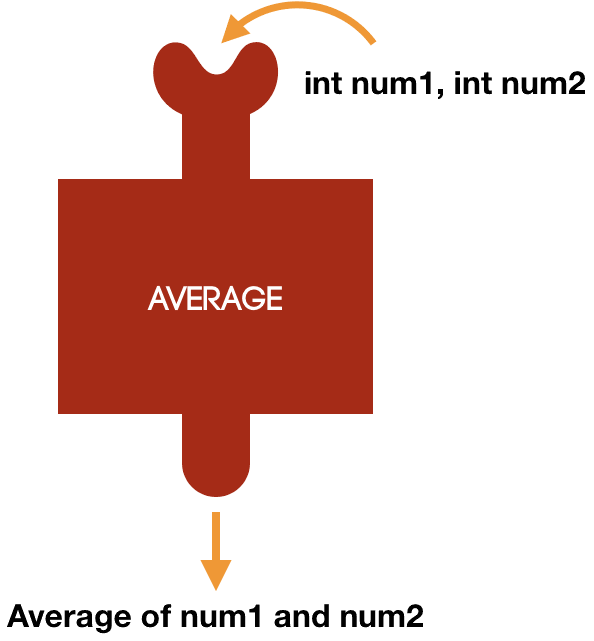 Here, the method named Average is taking num1 and num2 of integer type as input and then returning the average value of type double after calculating it.

The syntax for defining a method is


Let's see the average function that we defined above.

Therefore, we wrote int along with num1 and num2.

return avg; → This means that this method will give us or return us the variable avg (or value of the variable avg) which is of type double. You will understand this more clearly from examples.

To use a method, we need to call it. Once we call a method, it performs its operations (executes statements inside it).

To call a method, we need to specify the method name along with pass the argument required by the method.

So we will call our average function as shown below:

Now, let's combine all to take out the average of 2 numbers using a method.

static double Average(int num1, int num2) → You will learn about static in later chapters. For now, just ignore it. Our method named Average will give us back (return) a double and will take two integers - num1 and num2 as input. num1 and num2 are the parameters of the method.

After this, it is returning this value - return avg; because we have stated that our method will return a double during the time of declaration.

return keyword is used to make a method return something. The execution of a method stops as soon as after returning anything from it.

Now, we need to use this method. We will call this method and pass two integers to it. The values passed to a method are called arguments.

By writing c = Average(a, b), we are calling the method Average method with 2 arguments (a and b). Now, Average is called and it calculated and returned the average value of num1 and num2. 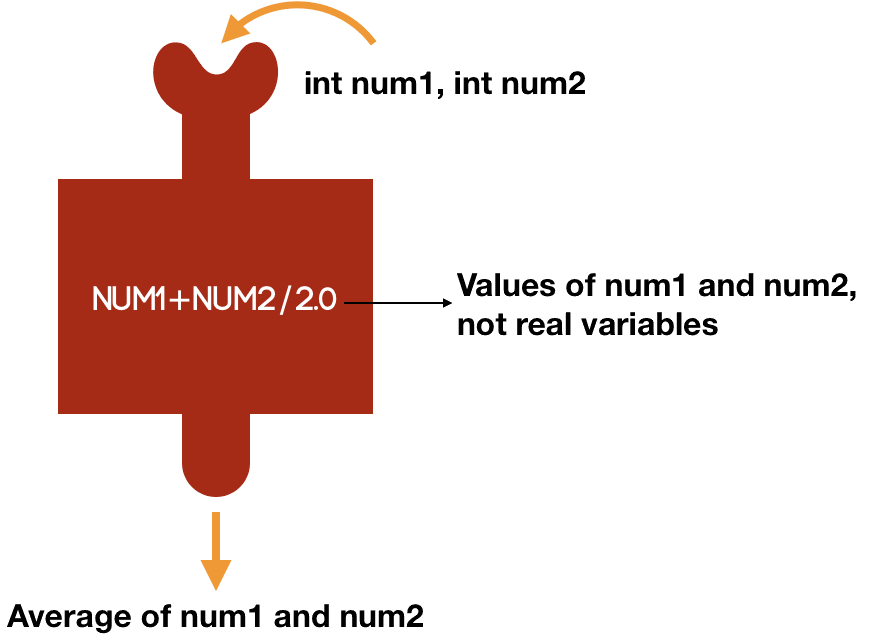 As the method is returning a double, and here it is 4.5, so, this expression (c = Average(a, b)) will be equivalent to c = 4.5, since 4.5 is returned by the function and its value gets stored in a variable c.

It is not necessary for a method to return data. A method can not return anything from it and in that case, its return type would be void. Let's look at the following example:

void means that the method will not return anything.

It is also possible to define a method without any arguments. Let's see its example.

Output
Function with no argument

As we saw, there is no argument given to the method Display.

A variable defined inside a method is unavailable outside it. It means that its scope vanishes outside the method in which it is defined.

Calling a Method Inside Another

Yes, we can call a method inside another method. We have already done this. We were calling our methods inside the Main method. Now, look at an example in which there are two user-defined methods. And we will call one inside another.

Let's take one more example of a method calling a different method.

We have called a method into a different one. Recursion is the calling of a method within the same method.

Let's consider an example in which we have to calculate the factorial of a number.

Output
Enter number 4 Factorial of 4 is 24

So if we give 0 to the method Factorial, it will return us 1.

Hopefully, you have understood this. Most of the programmers find this difficult in their beginning days. So, congrats!

As stated earlier, when we pass a variable to a method, its value is passed (or one can say a copy of it) and not the original variable. It means that if we make any change to the variable, it won't be reflected back. This is pass by value i.e., we are just passing the values of variables and not the original variables. Let's look at an example trying to change the value of a variable inside a method.

If we ever need to change the value of a variable inside a method which we want to reflect outside also, we pass the reference of variables called pass by reference.

We use ref keyword to pass the argument as reference-type. Let's look at an example.

You can see that this time the change in the variable is also reflecting outside the method.

out keyword is also used for pass by reference. It is also like ref keyword and the value change inside the method will be reflected outside but the difference is that we can pass a variable without even assigning any value to it using the out keyword i.e., without even initializing a variable.

Let's look at an example.

You can see that we passed the variable b without even assigning any value to it.

In case of any doubt, you can ask your questions on our Discussion Forum.