In this chapter, we will learn about another important concept of Object Oriented Programming - Abstraction. We will only learn about the conceptual part of the abstraction in this chapter and in the next two chapters, we will implement it. So, let’s get started.

The word “abstraction” means something which is theoretical without a concrete existence. For a real life example, even a car is an abstraction. If you want to apply the brake you press the brake pedal and if you want to accelerate you press the accelerator pedal. But do you know how the car speed decreases on pressing the brake pedal or increases on pressing the accelerator pedal? No, right? So, the process of how the pedals work has no concrete existence as per our knowledge but we have a theoretical idea that somehow using this pedal increases or decreases the speed of the car.

Cutting down, abstraction is making things simpler for us. Just a functionality (brake and accelerator functionalities in the above example) is exposed to us and all the complex process of that functionality is occurring under the hood. And this is where we programmers also use the word abstraction and it is even a core part of object oriented programming.

Let’s understand the word abstract with respect to programming.

Thinking about something regarding programming where we just have to use a way exposed to us to perform some action, the first thing that comes in our mind is a method. We just call a method and it performs its action. In case of methods written by other programmers or let’s take in-built methods like println, we don’t know how it works. We just know what this method will do and we use the method to perform that action. This is an abstraction in programming.

Till this point, it seems like methods are the only way for abstraction but there are more examples like we use few commands which are exposed to us to interact with a database and all the process occur under the hood.

Let’s look at some of the conceptual examples of the term abstraction.

Till now, the conceptual meaning of abstraction must be clear. In object oriented programming, the concept of abstraction is particularly used to improve the design of classes and subclasses. According to it, we define a superclass or an abstract superclass with the aim that it should serve as a definition and the subclasses inheriting it will implement this definition to make something significant. For example, a vehicle is a theoretical definition that something which is mobile and humans can use to travel. But this definition comes to life only after something like a car or a bike, etc. use it to make something significant.

Let’s think in an object oriented way. An abstract superclass Vehicle is only a definition, so there is no need to make objects of it, we will make objects it its subclasses - Car, Bike, etc. And it has some methods like moveForward, moveBackward, turnLeft and turnRight to provide the required mobility. But the way of implementation of these method i.e., the way a bike moves forward and the way a car moves forward will be different. So, these methods will be defined differently for different subclasses. It means an abstract superclass will only specify that these methods must be present in all of its subclasses but they will be defined individually by subclasses themselves. 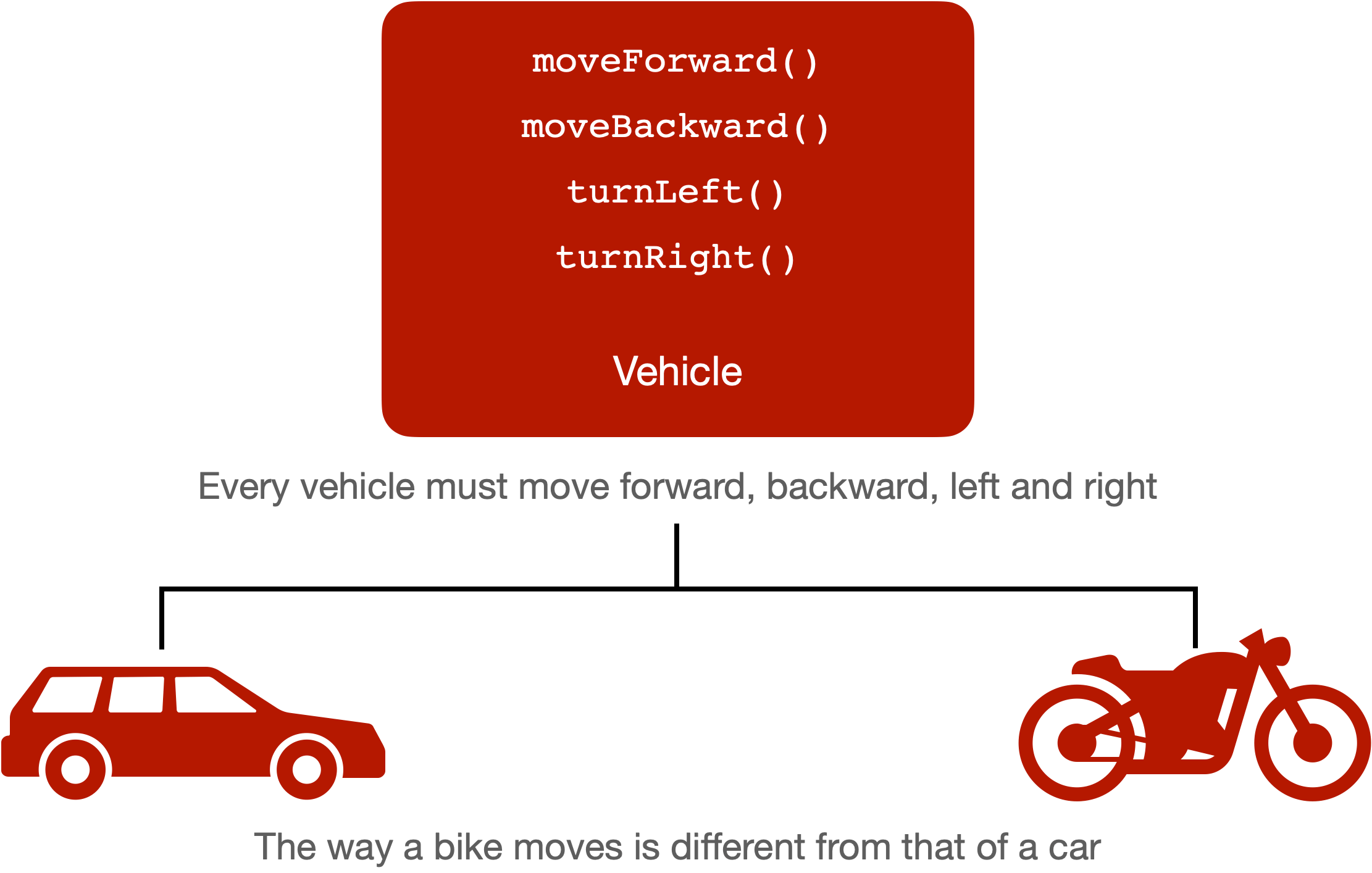 It means that abstraction is like a simple inheritance but with more restrictions, so that the definition of the superclass is followed strictly among the subclasses.

This also fulfills the concept of abstraction in one more way i.e., we are sure that these methods will be present in all the subclasses of a particular abstract superclass and we can directly use them without worrying about their implementation in different subclasses. Let’s take one more example of a Shape class. An abstract class has to define structure for its subclasses. So, an abstract class has method declarations without their bodies and all its subclasses must have those methods with their definitions according to the subclasses itself. 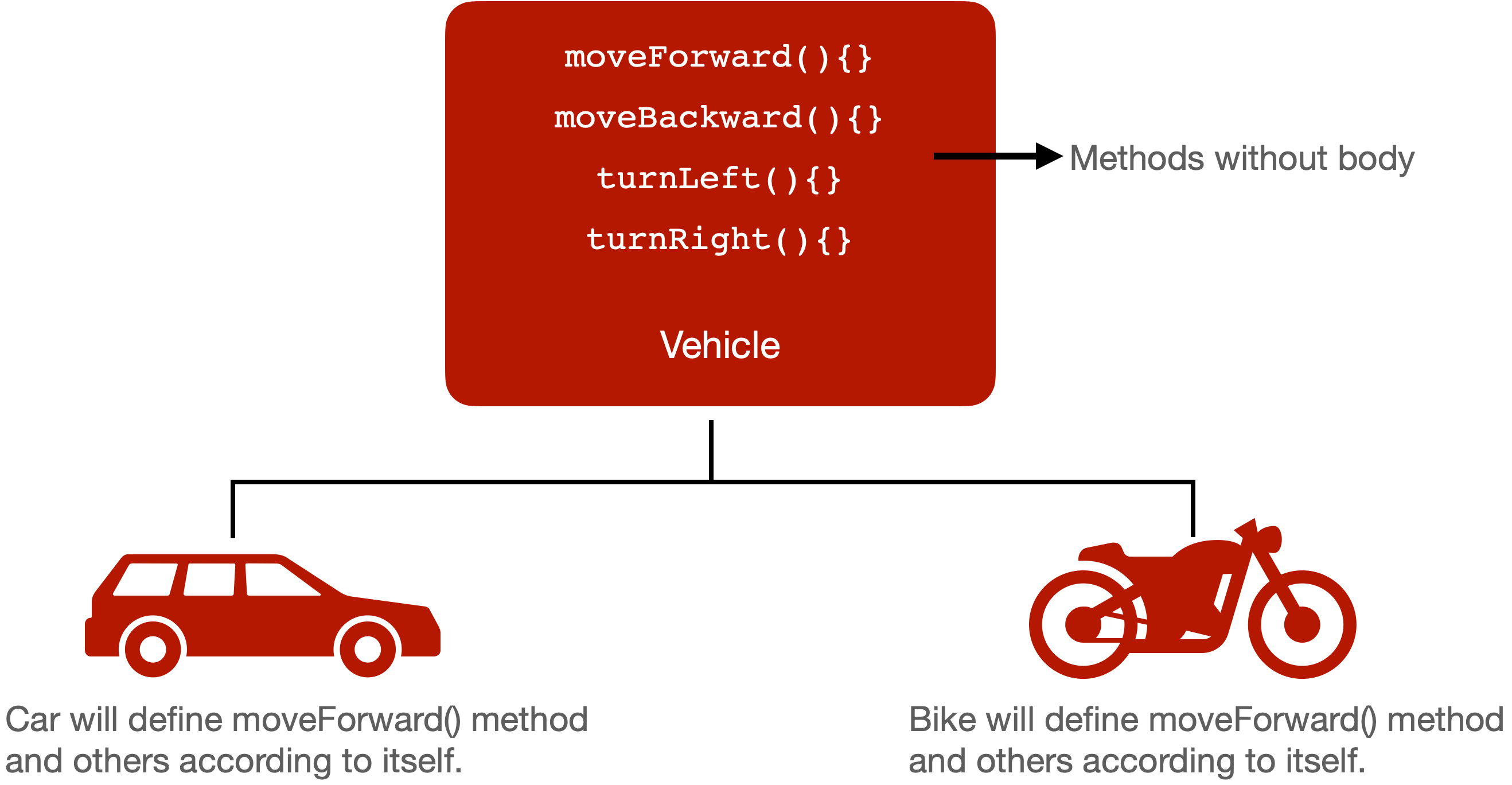 The superclass Shape will specify that all of its subclasses will have methods getPerimeter and getArea but as far as the Shape class is considered itself, we don’t have a definition for area and perimeter.

Now, suppose classes Circle and Rectangle are inheriting the Shape class. These classes will have their own definitions for getArea and getPerimeter. 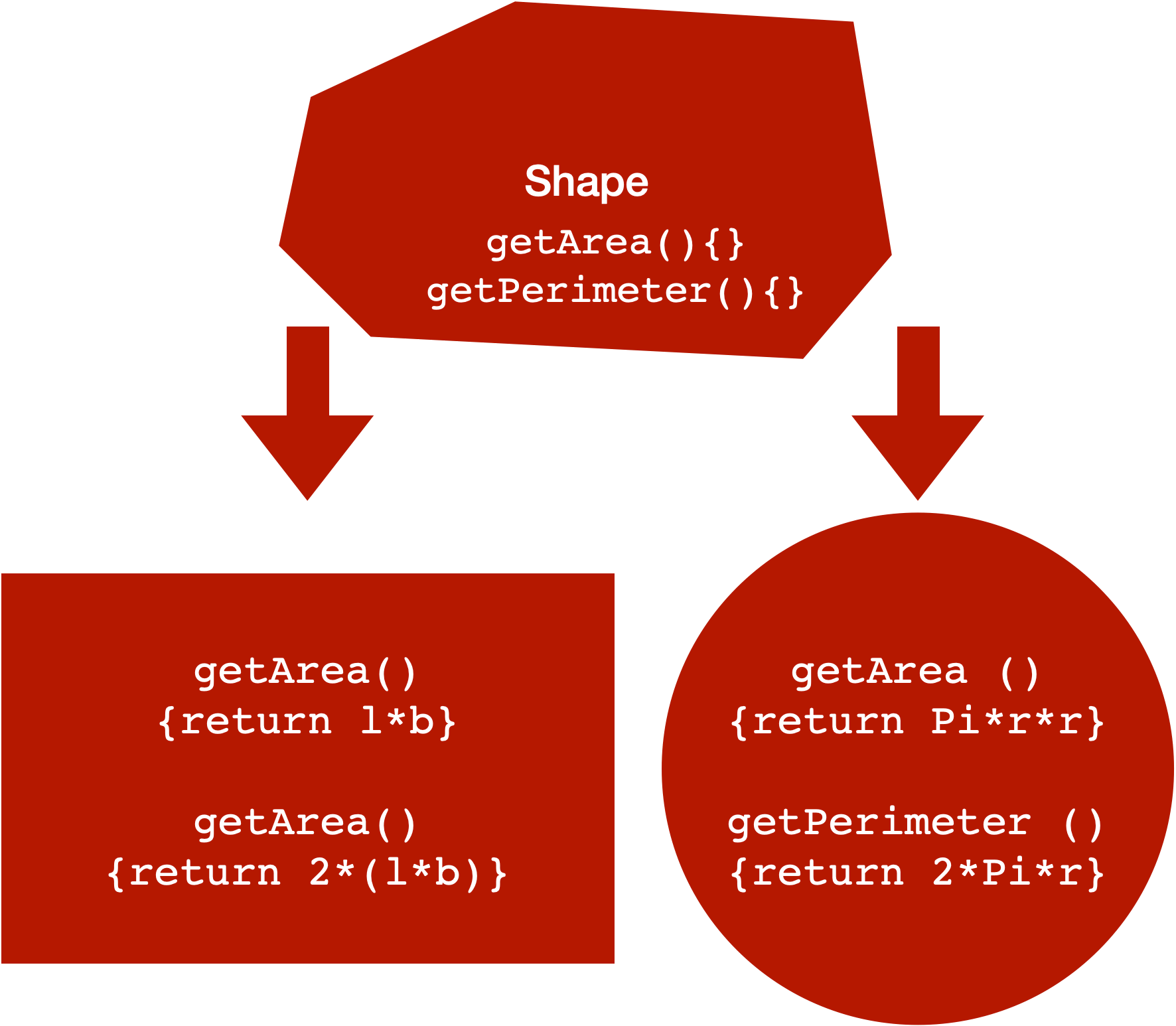 Let’s sum up the design level abstraction. A superclass should only contain definition. So, there is no need to create objects of the superclass itself. Instead we will have subclasses and create their objects. Now to make a superclass fully abstract, all of its methods should not have body definitions. This way, we will be sure that all the required methods are defined according to the need of individual subclasses.

In Java, abstraction in design level can be achieved by two ways:

For now, you can understand it by taking the vehicle example we have already discussed. There can be many ways to implement the same thing we did before. But make an abstract Vehicle class guarantee that all of its subclasses either made by us or other programmers will have 4 methods - moveForward, moveBackward, turnLeft and turnRight. It means we can use these methods on objects of any of the subclasses. This is a cleaner way to write code and also brings simplicity to our code.

Let’s understand abstract classes, one of the ways to achieve abstraction in Java.

You only live once, but if you do it right, once is enough.
- Mae West
PREV NEXT
CODESDOPE PRO
It's
Simple and Conceptual
with Chance for Internship*
C++ in English
Launched
Get C++ (English) course for 999
Pro Course Features
Simple Videos
Questions to Practice
Solved Examples
Internship Chance*
Certificate of Completion
Discussion with Experts
Learn for FREE
We're Hiring
Campus Ambassadors
Register