Methods are used to perform specific tasks. Java provides some methods which we can use to perform different tasks. For example, The println from System.out (System.out.println()) which we have been using is a method which is used to print something.

Why Do We Need Methods?

So let’s see how to define and use a method.

Let's start by first looking at the main method, which we have defined in all our programs.

public static void main(String[] args) - When we run a Java program, the main method is executed first. So to execute a program in Java, there must be a main method.

Here, public is a modifier. You will learn about modifiers in a later chapter.

static means we can access this method without making any object of the class (classes and objects will also be taught later).

For now, just keep in mind that we are going to use this structure i.e., we will write public static ... to make our own method. You will learn the exact significance of public and static in later chapters.

void means that the method does not return anything. For the first few examples, we will use void and we will learn about returning something from a method later in this chapter itself.

Now let’s define a simple method which will help you understand all that we have discussed above.

Output
This is a method
11

Note that we defined the method sum() as public, static and void. As said earlier, these will be discussed later. (Keep in mind that because the main method is static, so to call our method from the main method, our method must also be static.)

Now let’s call this method more than once.

Here, we called the method sum() two times inside the main method.

So, by now you must have understood how to define and call a method in Java.

We can also pass values to a method. Think of a situation where you want to get the area of a rectangle printed on the screen and you want to do it many times for different rectangles. Writing the same code again and again will do the job but there is an easier solution.

printArea(int x, int y) → We defined a method named printArea. We also defined two parameters x and y of type int. This means that whenever we call this method, we have to pass two integers to it.

Inside the main method, the first statement is printArea(2, 4). This statement calls the printArea() method by passing two integers 2 and 4. Whenever a value is passed to a method, the respective parameter takes that value. In this case, the parameters x and y take the values 2 and 4 respectively. So, we have x = 2 and y = 4.

Similarly, when the second statement printArea(4, 8) calls the method, the parameters x and y take the values 4 and 8 respectively.

In this way, we are able to display the areas of different rectangles by calling the same method by passing different values of length and breadth.

Here, the variables x and y are the parameters and the values 2 and 4 passed in the method call are the arguments.

Look at another example.

We can define any number of parameters in a method.

Let's look at one more example.

As discussed in the beginning of this chapter, we can also define methods which return some value. Let’s see how.

Let’s understand this through an example.

int getArea(int x, int y) → Writing int before the method name means that the method returns an integer value. Thus, we will get some integer value whenever we call this method.

return z → This statement terminates the method and returns the value of z. Note that in this example, the value of z must be an integer because we have declared the return type of the method as int. If it is not an integer, then we will get an error on running the program.

Now, getArea(2, 4) calls the method getArea() by passing 2 and 4. Thus, the value of the variable z becomes 8 (because x = 2 and y = 4) and return z returns the value 8. This returned value is assigned to the variable area. 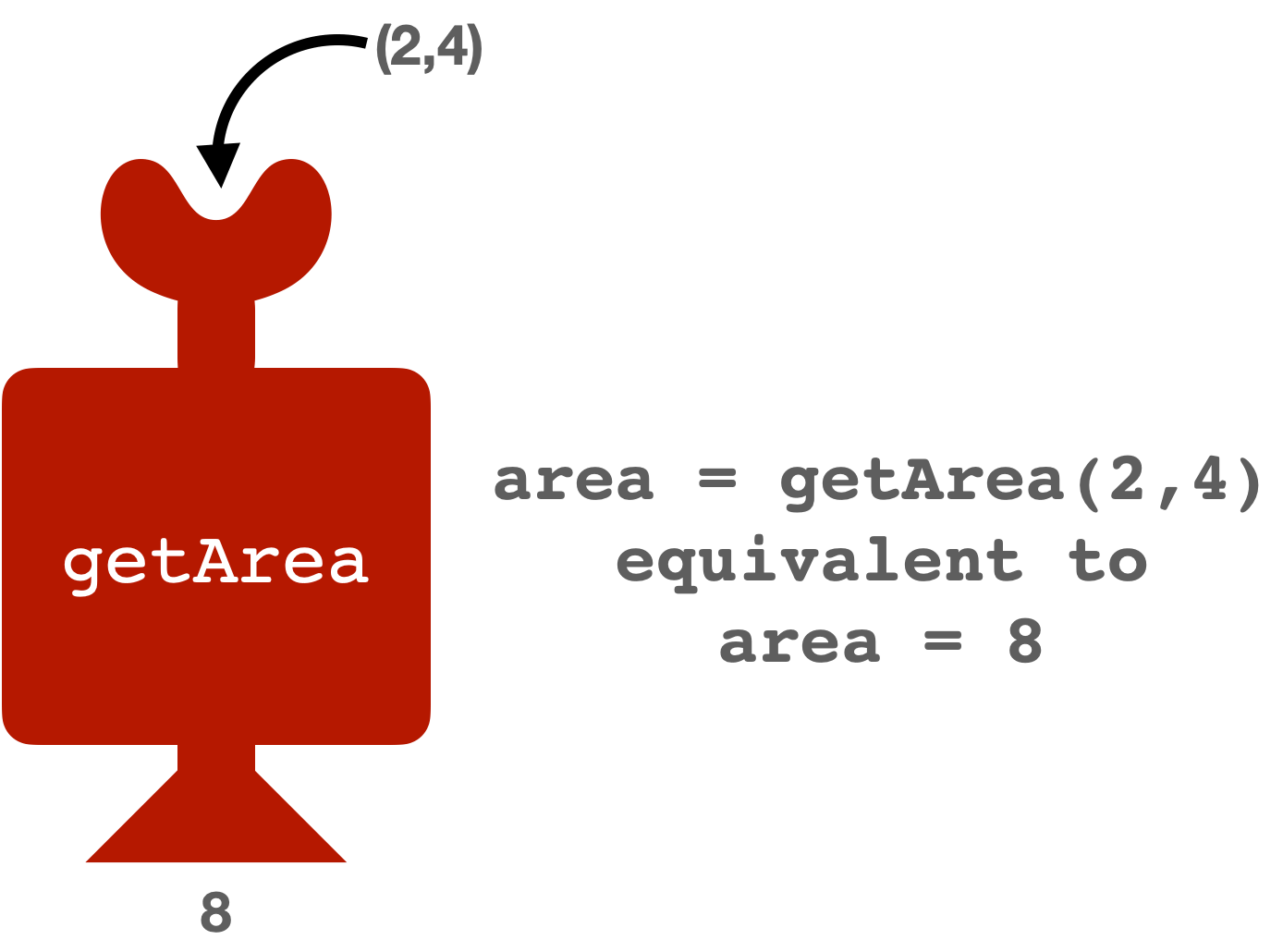 Output
Is number even? true

Here, the method isEven() returns a boolean (true or false). Inside the method, if the condition x%2 == 0 is true, then the method returns true, otherwise it returns false.

Calling a Method Inside Another Method

Yes, a method can be called inside another method. We have been doing this already. In this chapter, we have called all our methods inside the main method.

Now look at an example in which there are two user-defined methods, and one of them is called inside another.

If a variable is defined inside a method, then it is available only inside that method and not outside the method.
Output
14
In this example, we are calling methods getSum and getProduct inside the method getSumOfProduct.

Recursion is the process of calling a method within the same method. Before going into its detail, let's learn some mathematics.

The following program calculates the factorial of a number.

Output
Enter number
4
Factorial of 4 is 24

Let's go through this code. If we give 0 or 1, our method factorial() will return 1 because the values of both 0! and 1! are 1. It is straightforward up till here.

Now, if we pass 2 to our method, the following block of code gets executed.

Therefore, the method will finally return 2.

If you have understood this chapter, then pat yourself because many programmers find methods difficult to understand initially.

Now you can create methods to perform different tasks like checking if a number is even or odd, returning the factorial of a number, or for any other task. Since this is an important topic in programming, practice questions on methods in the practice section.

Nothing will work unless you do.
- Maya Angelou
PREV NEXT
CODESDOPE PRO
It's
Simple and Conceptual
with Chance for Internship*
C++ in English
Launched
Get C++ (English) course for 999
Pro Course Features
Simple Videos
Questions to Practice
Solved Examples
Internship Chance*
Certificate of Completion
Discussion with Experts
Learn for FREE
We're Hiring
Campus Ambassadors
Register