Now that you know how to print any value on the screen, let’s look into some basics and terminologies you should know while learning Python. This is just an introductory chapter to make you familiar with the common terminologies and basic concepts.

Look at the following code.

This code has two statements. The first statement num = 10 assigns a value of 10 to a variable num, and the second statement print('num =', num) prints num = 10.

Sometimes a statement can get lengthy and we might want to break it into multiple lines just to make it more readable. We can do so by using the line continuation character (\).

This statement can be written over multiple lines as follows.

Look at another example in which a long text is divided into multiple substrings that are written over different lines.

Output
Hello learners, Python is a wonderful language to code in. This text is written over multiple lines to improve readability but it will be printed in a single line on screen.

Parentheses ( ), brackets [ ], and braces { } automatically applies line continuation to anything written inside them and we don’t need to explicitly use line continuation character (\). The multiline statements in the above two examples can be rewritten using parentheses as shown below.

In Python, we can write multiple statements in a single line by separating them by semicolons (;).

Output
10
Hello World
But this is generally not practised by Python programmers and you should avoid it too.

Do you know, you can include some comments in your code which won't be compiled and your computer will simply ignore them while running your code. They are written to make our code more readable. Let’s look at them for better understanding.

Single line comments always start with '#'. The next line is not a part of the comment.

You can also write comments which extend upto multiple lines. Multiline comments are written within 3 single quotes ''' ''' or 3 double quotes """ """. 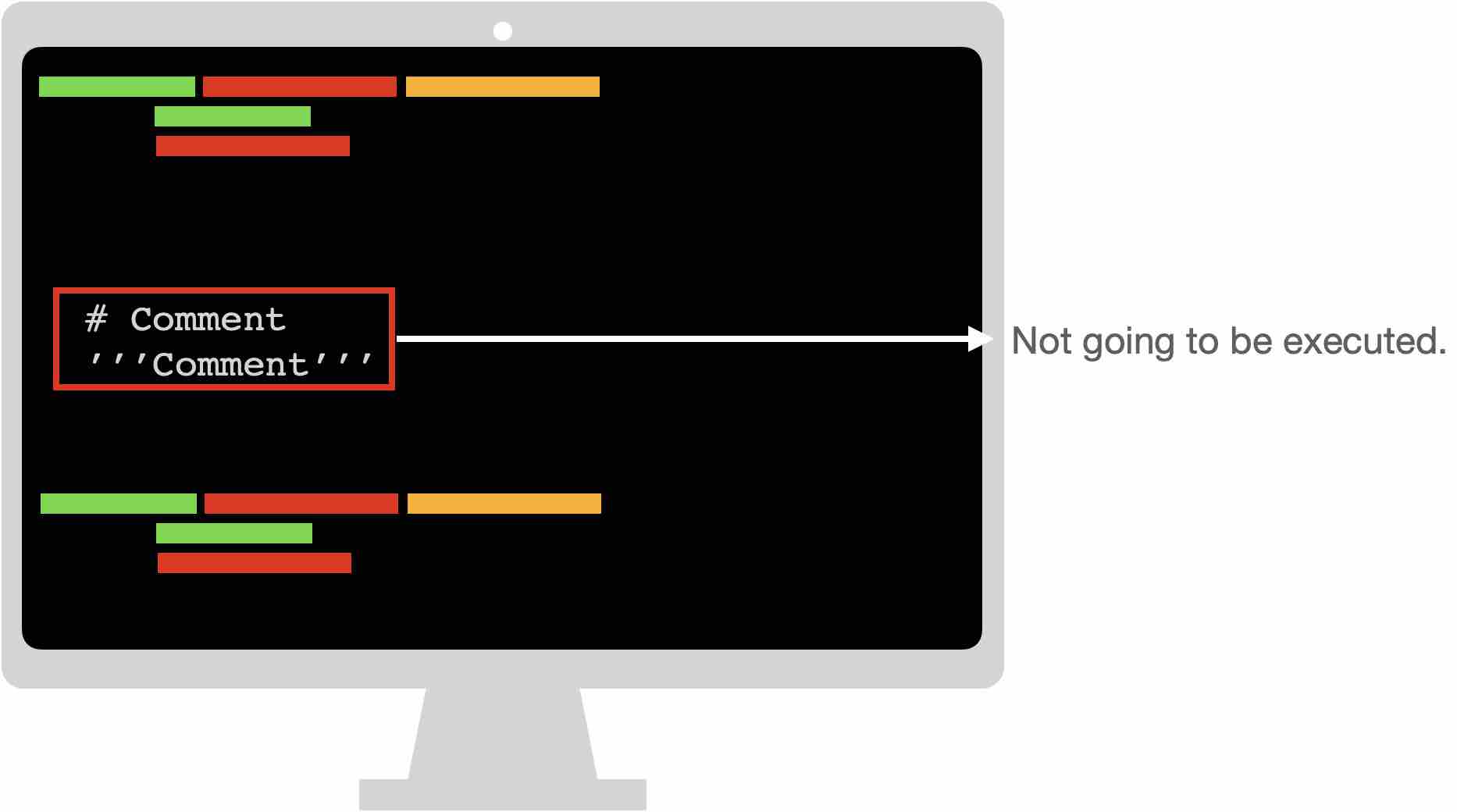 Why to use Comments?

As mentioned earlier, it makes your code more understandable. Assume that you have written a software and after releasing it, you hired a few good programmers for its maintenance. Without comments, it would be a very difficult job for them to understand your code. And most of the time it happens that the person who has written a code is not the one who is going to modify it. So, make a habit of writing good comments.

It is also not recommended to write too many comments. A clean and good code can be understood without comments.

There are few words that are used by the Python language itself. So, we can't use those words for the name of our variables as they are reserved for Python. For example, take the function which we have been using till now - print. The name ‘print’ is used by Python itself and thus we can’t use it as our variable name. Doing so will give us an error.

Here is the list of a few keywords reserved for Python.

An identifier is a name we give to entities like variables, functions, classes, etc. We will learn about these entities in later chapters. For now, just remember that whenever we define an entity, we assign it a name which is called an identifier. For example,

Here, x is an identifier.

There are some good practices to name identifiers which should be followed but are not mandatory.

Wooh! This chapter was a lengthy one but it was just to introduce you to the basics of Python. We will look at variables in somewhat more detail in the next chapter.

To learn from simple videos, you can always look at our Python video course on CodesDope Pro. It has over 500 practice questions and over 20 projects.
There is no glory in practice but there is no glory without practice.
PREV NEXT
CODESDOPE PRO
It's
Simple and Conceptual
with Chance for Internship*
C++ in English
Launched
Get C++ (English) course for 999
Pro Course Features
Simple Videos
Questions to Practice
Solved Examples
Internship Chance*
Certificate of Completion
Discussion with Experts
Learn for FREE
We're Hiring
Campus Ambassadors
Register