We have learned about different data types, showing their value on screen and also about taking input from a user. That was all the basics of Python. From now we will gradually proceed to more programmatic concepts of Python.

This chapter is about performing operations like addition, subtraction, etc similar to what we do in Maths.

In Python, there are symbols which are used to perform certain operations on variables. These symbols are known as operators. For example, (+) is an operator which is used for adding the values of two variables.

Let's take two variables a and b having values 3 and 2 respectively.

We can also introduce a third variable to store the result of an operation as done in the following example.

Difference Between / and // Operators in Python

Following is the list of relational operators in Python.

Again, take two variables a and b having values 3 and 2 respectively.

!= → It is just the opposite of ==. It is True if both values are not equal and False if they are equal.

> → Similar to > of mathematics. It is used to check if one value is greater than another or not.

Difference Between = And == in Python

Although = and == seem to be the same, they are quite different from each other. = is the assignment operator while == is the equality operator. 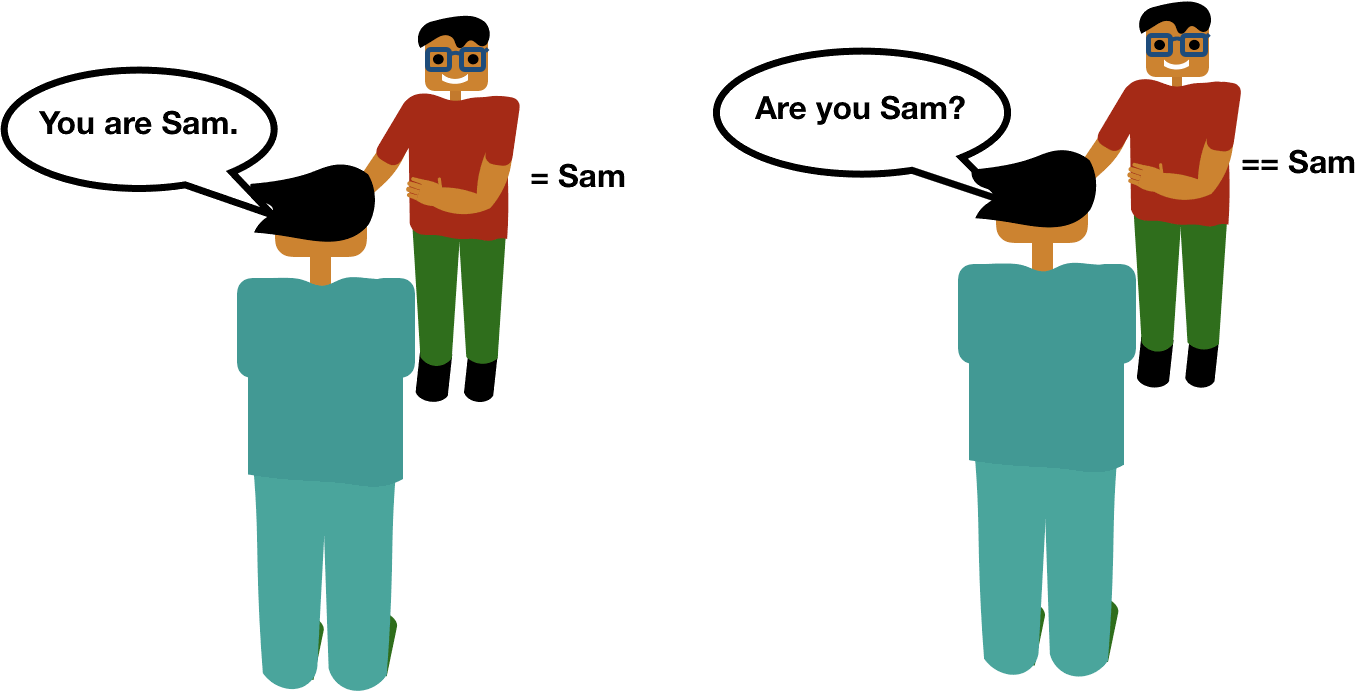 Look at the following table in which Exp1 and Exp2 are the two operands.

So, if we use and as an operator with any two operands and if both of them are True, then the result is True. Otherwise, the result is False.

and can be understood as both (both first and second)

or can be understood as either (either first or second or both).

and and or of programming are very much similar to English words 'and' and 'or'.

Again assume the value of a to be True and that of b to be False.

not operator converts True to False and vice versa.

This is the same example as the previous one. We just used not here and saw the answers get reversed.

We can’t use = to assign the value of the left side operand to the right side operand. For example, 10 = a would give us an error because we are trying to assign the variable a (right side) to 10 (left side) and this is invalid as 10 is a constant and we can't change its value to something else, a in this case.

There are more assignment operators which are listed in the following table.

We said that n+=2 is evaluated to n = n+2 but n = n+2 is evaluated? This is little different to what happens in normal mathematics. Here, the value of n + 2 is calculated first (using the old value of n).

So the calculated value is assigned to n, changing the value of n (making n = 7).

The decision of evaluating n+2 first is not a random one. Python has preset rules of which operation it is going to perform first which you will learn later in this chapter.

Let's look at an example.

In the above example, initially, the value of a is 7.

These are used to check if two operands (values) are located in the same memory. There are two identity operators in Python - is and is not.

In the chapter Variables, we saw that everything in Python is stored in a different memory location. is operator is used to check if the operands belong to the same memory location.

Also note that two variables having the same value does not necessarily mean that their values are stored in the same memory location.

Look at the following example.

These are used to check if a value is present in a sequence like string, list, tuple, etc. There are two membership operators in Python - in and not in.

'on' in a → Returned True because ‘on’ is present in "Python programming".

'p' not in a → Returned False because ‘p’ is present in "Python programming".

We can also test for a dictionary with membership operators, but the search happens only for the key, not for the value.

a is a dictionary having 1, 2 and ‘default’ as keys and ‘Blue’, ‘Green’ and ‘Orange’ as the corresponding values.

2 in a → Returned True because 2 is a key present in the dictionary a.

'Blue' in a → Returned False because 'Blue' is not a key present in the dictionary a. Remember that we search for just the keys, not the values.

We will be looking at more examples of Identity and Membership operators in later chapters.

Precedence of Operators in Python

In Maths, you might have learned about the BODMAS rule, but that rule is not applied here. If we have written more than one operator in an expression, then the operation that should be done first is governed by the following rule :- Expression inside brackets '()' are evaluated first. After that, the following table is followed (The operator at the top has the highest precedence (priority) and that at the bottom has the least precedence (priority)):

Since the priority order of the multiplication operator ( * ) is greater than that of the addition operator ( + ), so first 4 will get multiplied with 8 and after that 7 will be added to the product.

For example, take the expression.

Since the priorities of / and * are greater than those of + and -, therefore / and * will be evaluated first. Since / and * have the same priority order, so these will be evaluated from left to right simplifying to the following expression. (In the expression, / is written at left and * at right)

After /, * will be evaluated resulting in the following expression

Again - and + have the same precedence, therefore these will also be evaluated from left to right i.e. first 6 will be subtracted from 2 after which 8 will be added resulting in 4.

Hence we will get the result as 4.

If you don't want to remember these rules, then just put the expression you want to execute first in brackets. E.g.- If you want to divide the product of (2+2) and 444 by the quotient of (999/5), then write the expression as - ((2+2)*444)/(999/5). This will get evaluated as (4*444)/(999/5) and finally get simplified to 1776/199 (since 999/5 is 199 and not 199.8).
To learn from simple videos, you can always look at our Python video course on CodesDope Pro. It has over 500 practice questions and over 20 projects.
Programming is a skill best acquired by practice and example rather than from books.
- Alan Turing
PREV NEXT
CODESDOPE PRO
It's
Simple and Conceptual
with Chance for Internship*
C++ in English
Launched
Get C++ (English) course for 999
Pro Course Features
Simple Videos
Questions to Practice
Solved Examples
Internship Chance*
Certificate of Completion
Discussion with Experts
Learn for FREE
We're Hiring
Campus Ambassadors
Register