Classes and Objects in Java

In this section, you will learn to make your own class. Before going further, look at an example:

Let's go through this code to understand how to define our own class.
"Cl1" is our main class. Remember that as mentioned in the initial section, that the main class is a class which contains the main method ( public static void main(String [] args) ) and Java code begins its execution from this main class.

So, starting execution from 'Cl1' class ( as it is the main class ), Java will come to the line 'Student a = new Student();'. It means that 'a' is an object of the 'Student' class and for this 'Student' must be defined.

class Student - This is another class in our program. We have defined our own class named 'Student'. 'class' is a keyword which means that 'Student' is a class.
Inside the 'Student' class, we have a String variable 'name' and two methods 'getName' and 'setName'.
There is one more method whose name is same as its class name.

This method is called constructor. This method will be executed when objects of the class are created. This means that whenever we will create an object of the 'Student' class,

this method will be called and the String variable 'name' will become equal to "unknown".

And the two methods 'setName' and 'getName' are defined to change and return the String variable 'name' respectively.

It means Student a = new Student(); will first tell that 'a' is a 'Student' and the new operator will then create Student's instance with all the data members.

Let's sum up these things

Constructor is a special type of method which is used to initialize an object. It is invoked at the time of object creation.
We can also make a constructor with nothing in its body.
public Student(){ };

Constructor having some parameters

In this example, we have parameters in our constructor. As told earlier, a constructor is also a method which is executed at the time of creating an object and has the same name as that of its parent class. So, it will function like a method and assign the passed values from Rectangle(2,4); to length and breadth respectively. 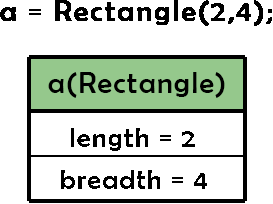 Returning and passing object in a method

Yes, we can return or pass object(s) to a method. Let's see an example.

Here, we have directly used 'getAcc' method on class 'Account' ( Account.getAcc() ) because 'getAcc' is a static method ( public static Account getAcc(Account a, Account b){ ). 'static' is explained below.
If there is no constructor in a class, the compiler automatically creates a default constructor.

Suppose we made a class Vehicle without any constructor, then automatically its constructor will be created with nothing in its body as follows.

Our method 'printArea' is static. So, we directly used it on the 'Rectangle' class, without making any object of it.

Don't spend so much time trying to choose the perfect opportunity that you miss the right opportunity.
-Michael Dell

Ion Exchange Solutions for Wastewater Treatment - Other
How to get text at paticular value from enum in c. - C
How to Boost Up the Website Loading Speed? - Other
write a program in c++ to Take 10 integer inputs from user and store them in an array. Again ask user to give a number. Now, tell user whether that nu - Cpp
Remove Gallbladder Issues with Precise Assistance Delivered by Gastroenterologists - Algorithms
constructorProblem Statement 1: Write a program to print the area of two rectangles having sides (4,5) and (5,8) respectively by creating a class name - Cpp
Recent Posts