We have already used different functions but in this section we are going to make our own functions.

Why do we need functions?

Function or subroutine or method is a set of codes written together in our program and given a name. We can call that set of program at any place of our code by just calling its name and without writing the whole set of codes again. 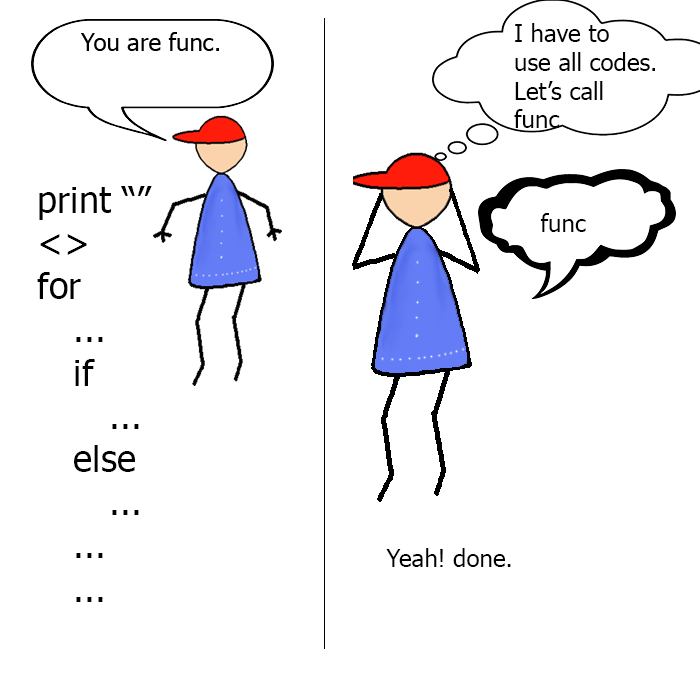 sub is a keyword used for making functions. We first write sub and then the name of the function to make a function.

print_poem is the name of the function. It means that we can use all the codes written inside it by just using this name.
print_poem(); - Here we have called the print_poem function and then the codes inside it got executed.

Notice that we have used { } to represent the body of a function.

As we saw here, we have not passed any parameter. Whenever we want to print the whole poem, we just have to call that function.

Let's see one more example for calculating the sum of the numbers passed to the function:

Returning from a function

Functions can do one more thing, they can return you something. This means that these can give you something back. This will be clearer from the following examples. Let's see how:

Here, our function is returning an array.

Calling a function inside another function

We have called is_even function inside div6 function.
Here, is_even will return 1 if the given number is even or divisible by 2. And if (is_even($y) and $y%3 == 0) will be true only if is_even and $y%3==0 both are true, which means that the number is divisible by both 2 and 3 or divisible by 6.

Recursion is calling a function inside the same function. Before going into this, let's learn some mathematics.

Notice that we have used my($x). This is necessary because any value of $x will be valid till its block only. It will be different for function 'fac' which is called from one 'fac' function.

You have just done something which most beginners have a tough time doing. Go and get yourself a cookie.

use warnings and use strict

use strict is used to make sure that all the variables are declared with my. It minimizes the number of errors. We write use strict; at the beginning of our program to use this.

use warnings is used to emit warnings if we are doing wrong things. We declare it also at the top of our program by writing use warnings;.

Let's write the above code using these two and without my and see what happens.

Do you know Fibonacci series?

It is a series having its 0th and 1st terms 0 and 1 respectively.

%prev = (0=>0,1=>1) - We are using a hash to store the Fibonacci series corresponding to the nth term. Initially there are only two numbers f(0) = 0 and f(1) = 1.
Coming to the next line:
if (exists($prev{$n})) If the required term is in the hash, then it will simply return that, else it will calculate and also store the corresponding calculated value in the hash.