C# is a simple and powerful programming language which is used to develop many robust applications. It is pronounced as C Sharp.

There are many features of C# which have made it one of the most widely used programming languages. It is an object-oriented language which is compatible with other .NET languages. It is type safe because a C# code can access only that part of memory which it has permission to access and execute, thus increasing the safety of the program.

C# is used to develop a wide range of applications. Following are some of the applications developed using C# :

In this entire C# tutorial, you will be learning about writing C# programs. But what after that?

After writing any program, we need to compile and run it to see the output of the program.

So, what is meant by compiling?

When we write our program in C# language, it needs to be converted to machine language (which is binary language consisting of 0s and 1s) so that computer can understand and execute it. This conversion is known as compiling a program. We compile a code with the help of a compiler.

To write and compile our C# program, we have been provided with many IDEs.

An IDE consists of a Text Editor as well as a Compiler. We type our program in the text editor which is then compiled by the compiler.

We write our program in a text editor. The file containing our program is called source file and is saved with a .cs extension.

After saving our program in a file with the .cs extension, we need to compile it to convert it into machine language that computer can understand.

Now let's see how to compile and execute a C# program on different operating systems. We are only going to show how to run a C# program, the working of the code is explained in the next chapter.

We can edit and compile programs using Visual Studio which allows us to write, compile and run our program. Let's see how to do it.

Before learning to write a program in Visual Studio, first, make sure it is installed in your computer. If not, then download and install it from here.

1. On opening Visual Studio, you will get a window. Click on File → New → Project. 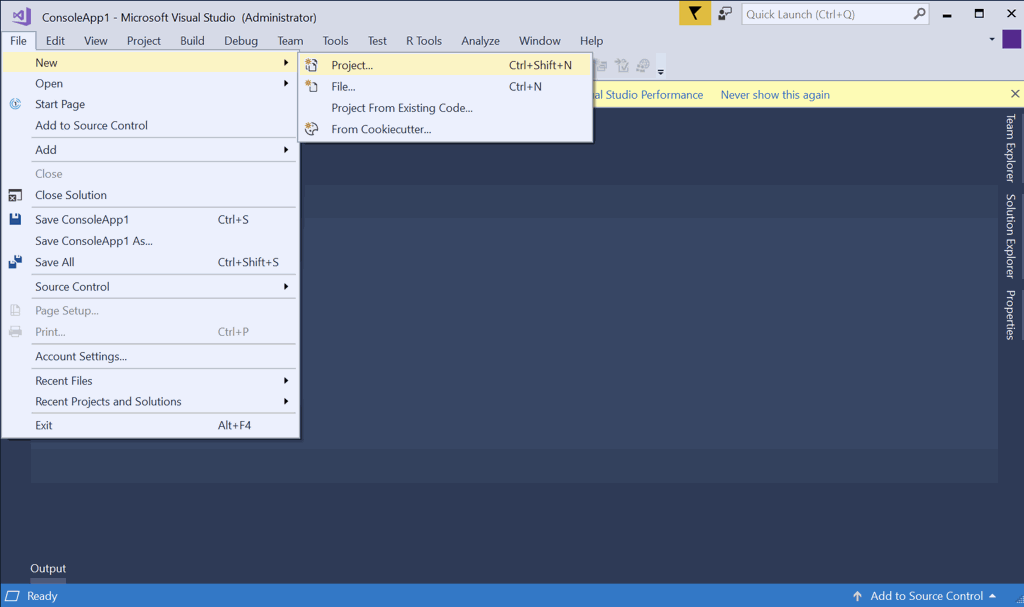 3. Give the project name in the Name text box, and then click on OK button. 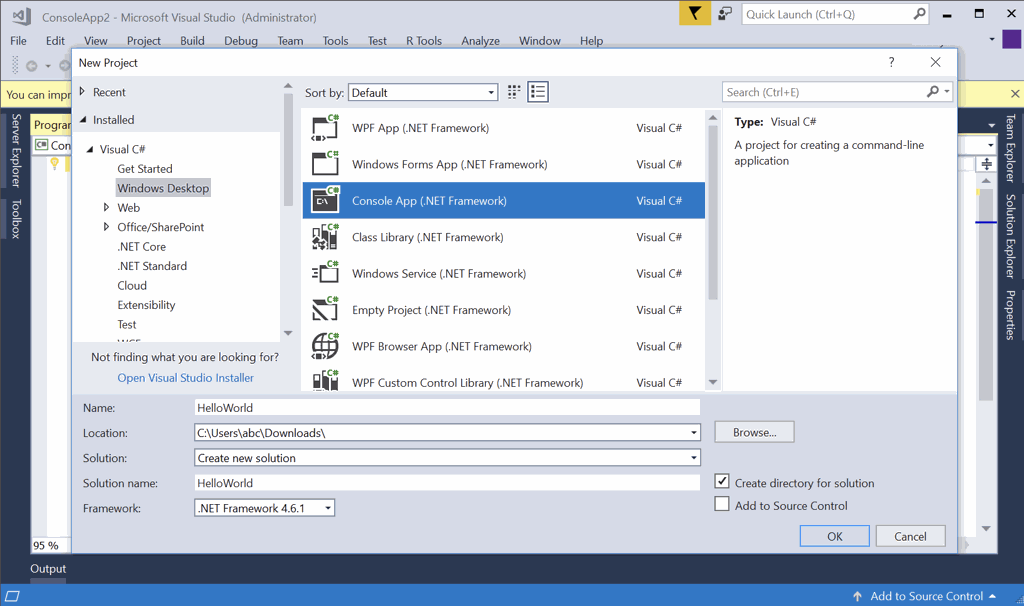 3. A file named Program.cs will get opened in the Code Editor. Replace its content with your C# program given below. 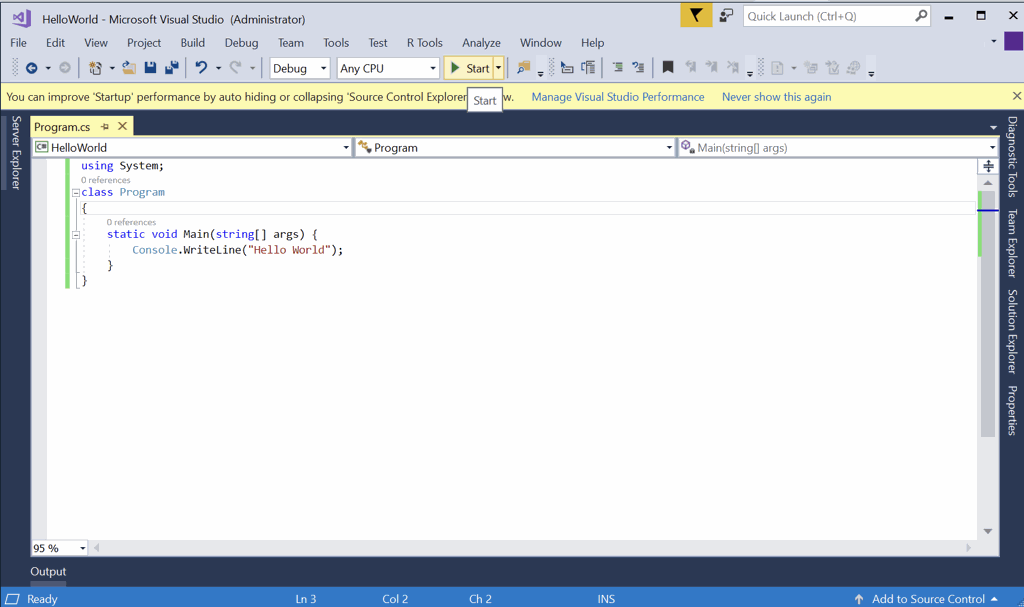 4. To run the project, click on Debug → Start Without Debugging or press Ctrl+F5 keys. 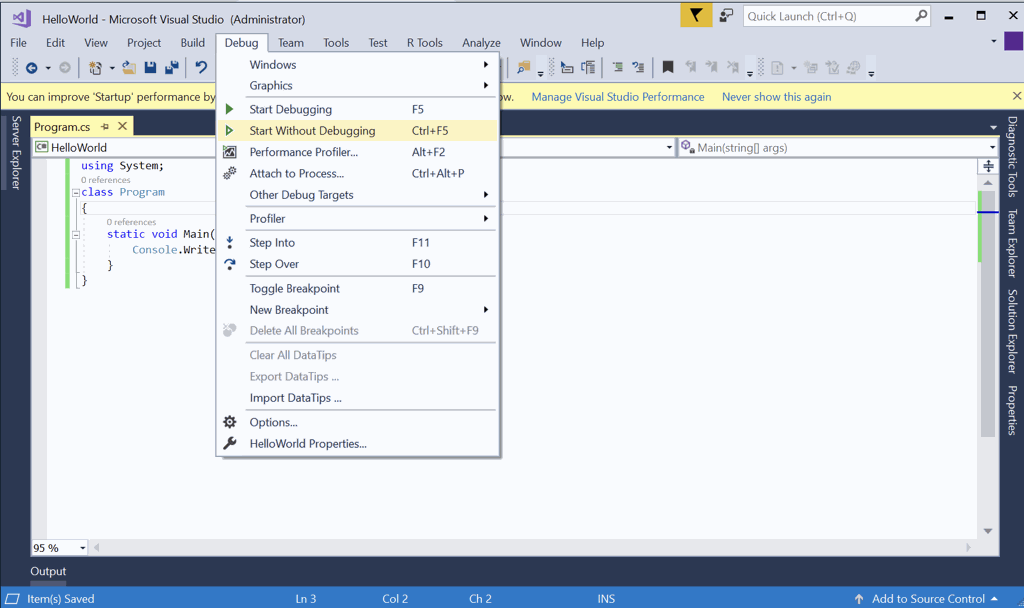 5. A Command Prompt window will appear with "Hello World" written. 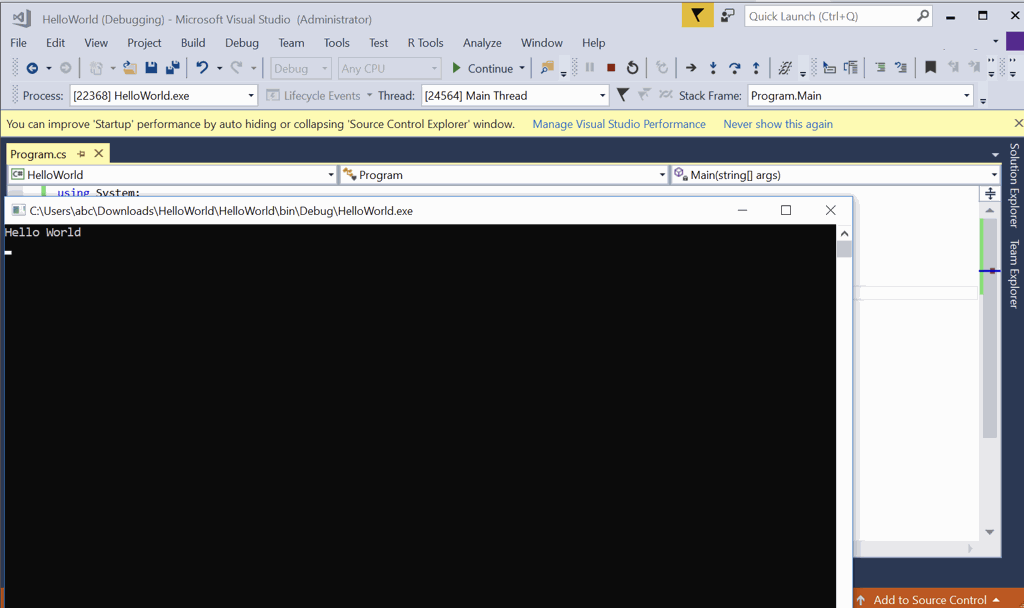 If you want to use the debugger, then put the breakpoint on the last line as shown below. Then to run the project, click on the Start button or press the F5 key. 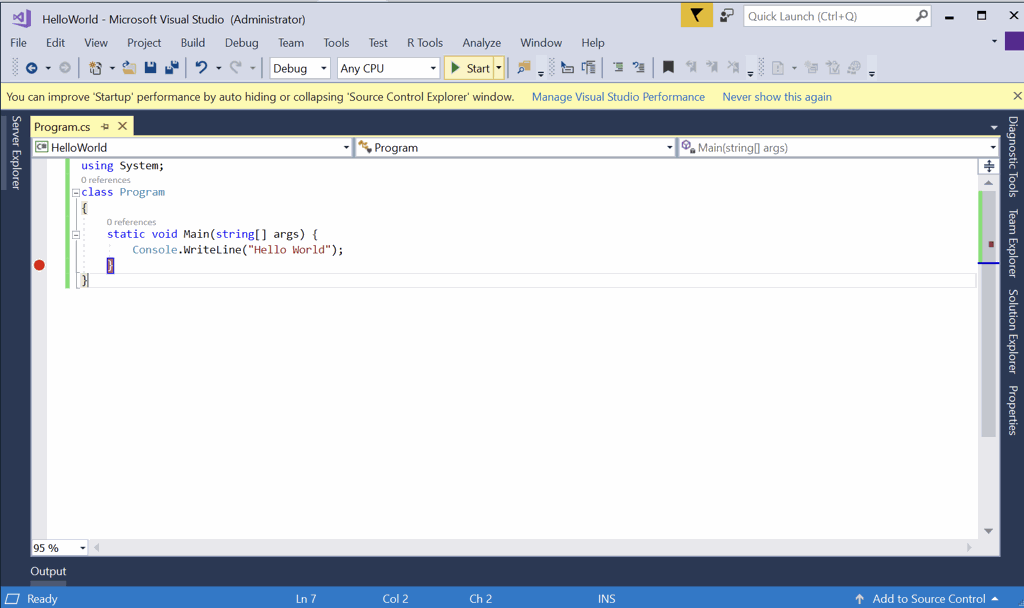 1. Write your C# program (code given below) in a text editor like Notepad and save it with a filename having .cs extension. In our case, we named it as hello.cs.

3. To check if the path of the C# compiler is set as Environment Variable, type csc and press Enter. You should get something as shown below. 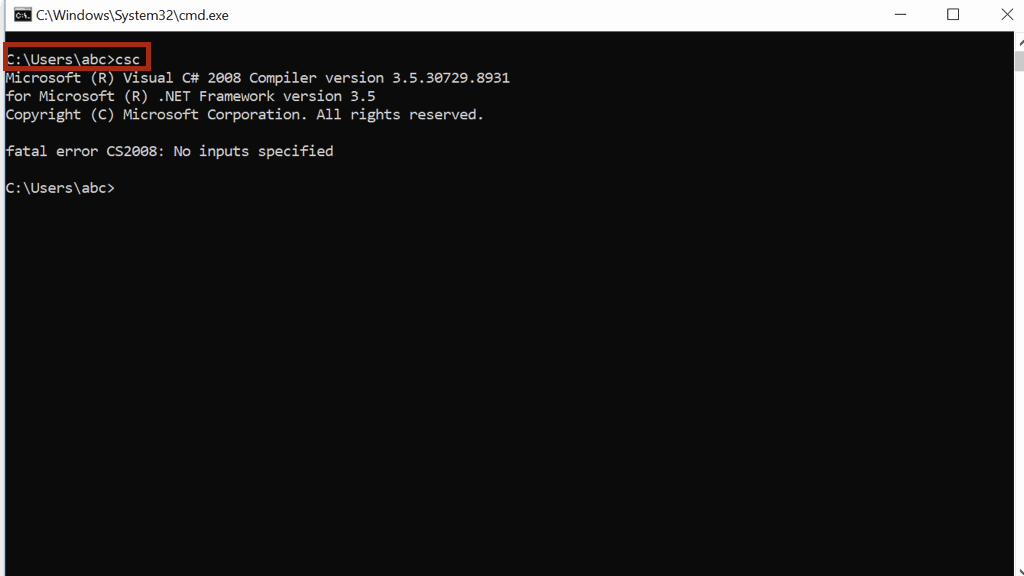 If you are getting this message - 'csc' is not recognized as an internal or external command, operable program or batch file, then you need to the path of the C# compiler as Environment Variable.

4. To set the path as Environment Variable, right click on My Computer and select Properties. 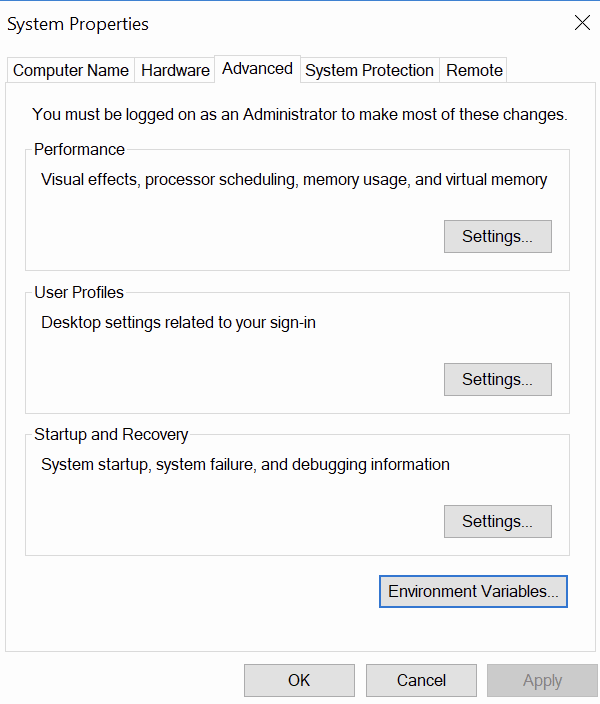 7. In the System Variables box, select Path and click on the Edit button. 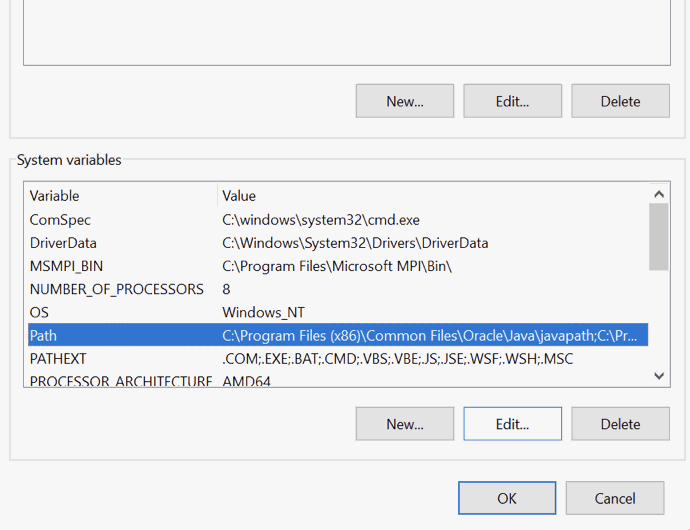 8. An Edit Environment variable window will appear. Let's assume that csc.exe is located in C:\Windows\Microsoft.NET\Framework64\v3.5 directory. This directory is the path to the compiler.

Click on the New button and add the compiler path in the text box created as shown below. Then click on Ok. 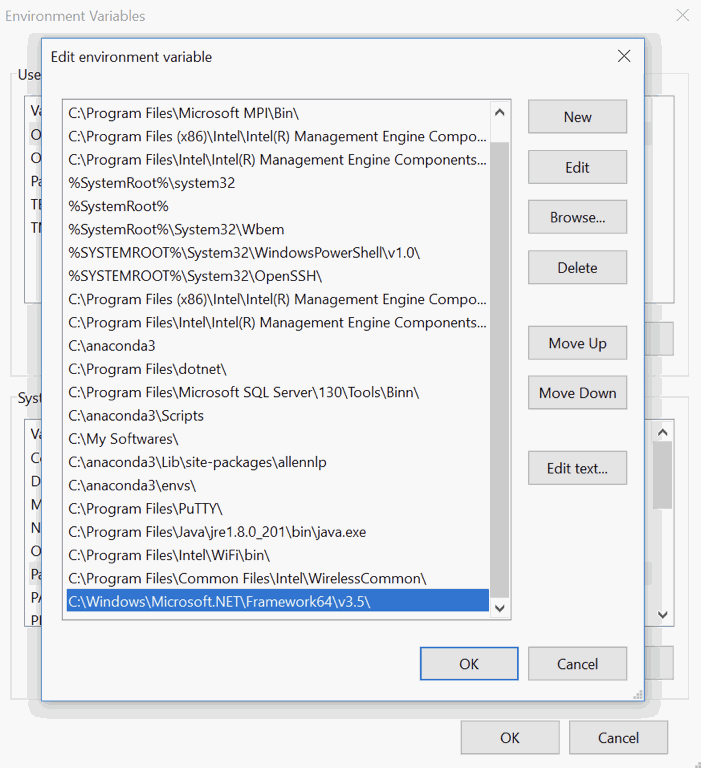 9. Now open a new Command Prompt window. Use the command cd followed by a directory name to change your working directory. For example, if you are operating in C:\Users\John\Project and want to get to C:\Users\John\Project\prog ,then you need to type cd prog and press Enter. (This new directory should contain your previously created C# file (hello.cs in our case)).

10. Once you are in the correct directory in which you have your program, then you can compile and run your program.

To compile, type csc filename.cs and press Enter. Here, our filename is hello.cs, so we will write csc hello.cs. If it shows any error, then try to remove that error from your program and then again save and compile your program. 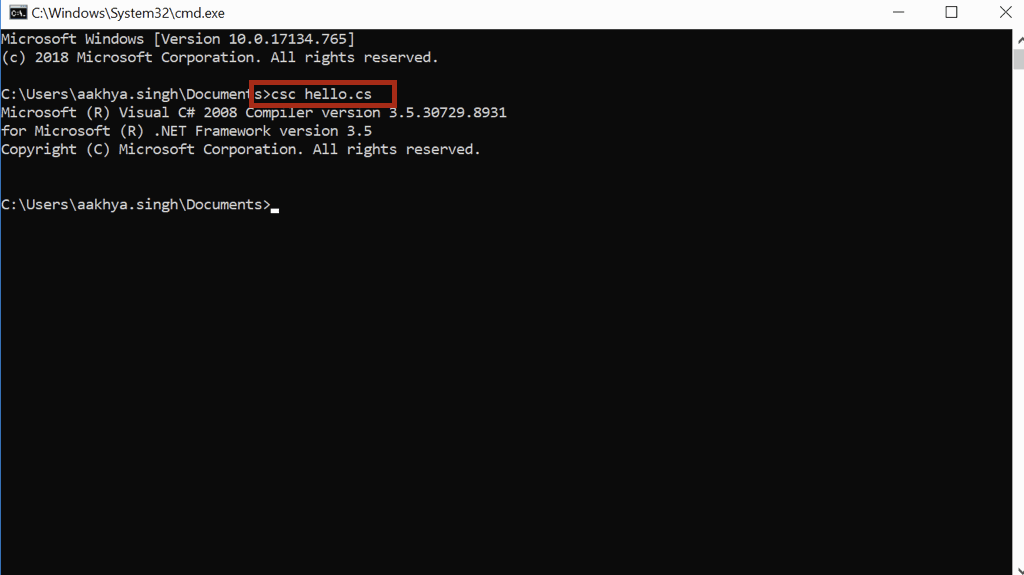 11. Once the program is compiled, run the program by typing filename (hello in our case) and then pressing Enter. We will get the output as shown below. 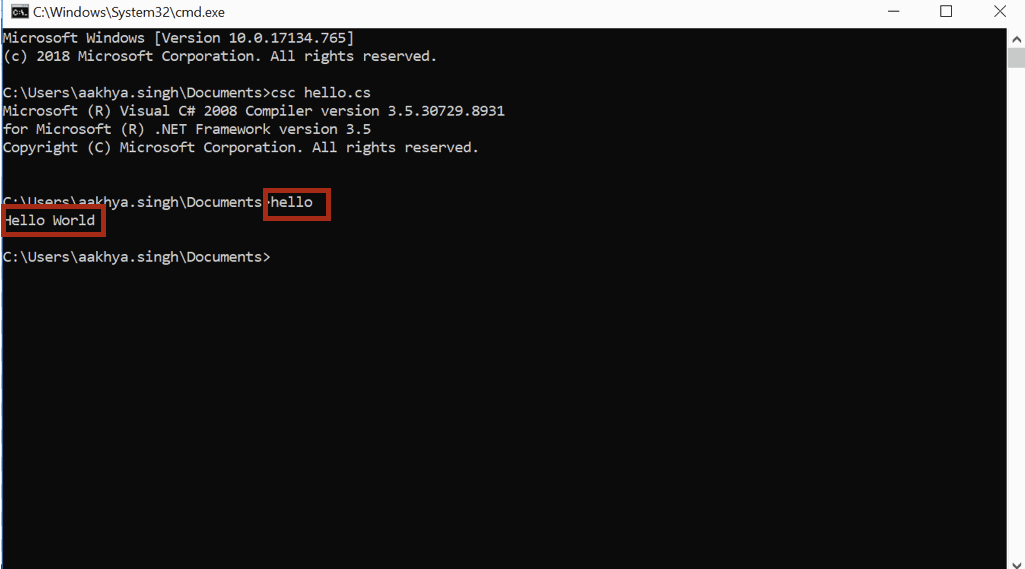 For Linux, you can write your C# program in various text editors like Vim (or vi), Sublime, Atom, etc. To compile and run our C# program in Linux, we will use Mono which is an open-source implementation of the .NET framework.

So let's see how to create and run a C# program on Linux. 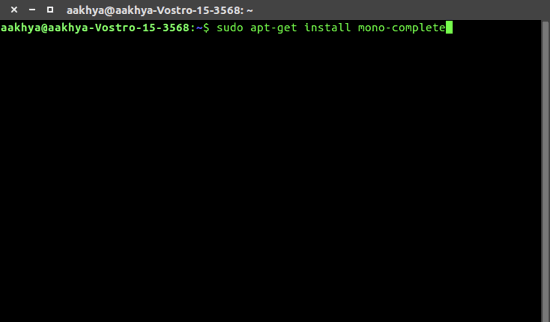 4. Now, you can compile the program using mcs filename.cs, so in our case, mcs hello.cs.

5. To execute the program, write mono filename.exe, so in our case, mono hello.exe.

You can see "Hello World" printed on the screen.

In Mac, you can use any text editor of your choice, we are going to use Atom. To compile and run our C# program in Mac, we will use Mono which is an open-source implementation of the .NET framework.

So let's see how to create and run a C# program on Mac. 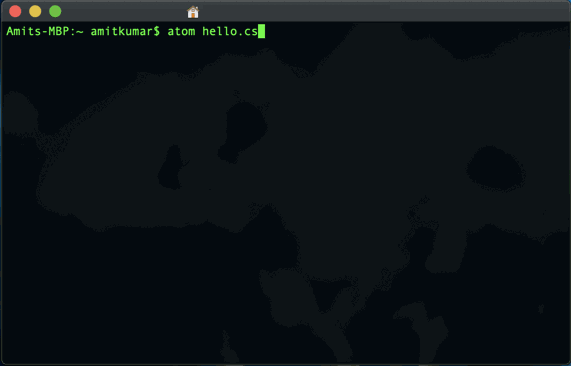 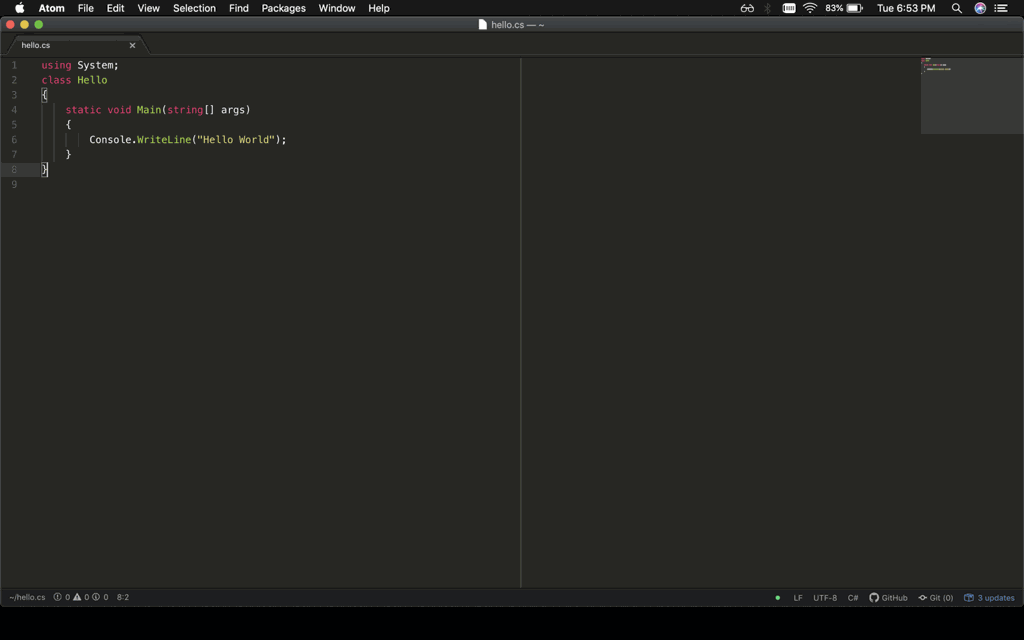 4. Now, you can compile the program using mcs filename.cs, so in our case, mcs hello.cs. 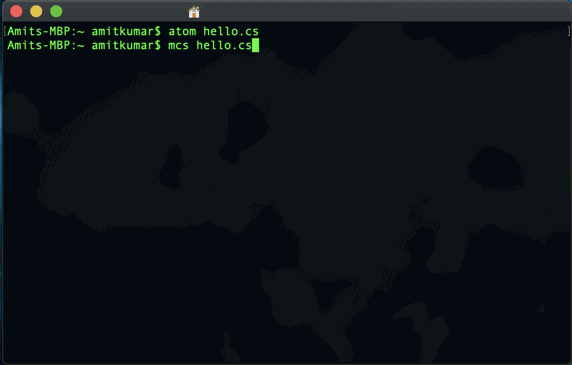 5. To execute the program, write mono filename.exe, so in our case, mono hello.exe. 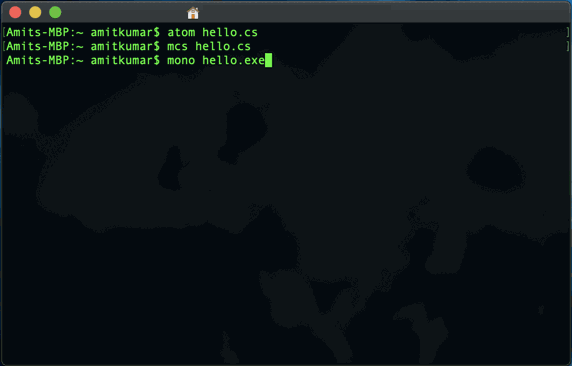 You can see "Hello World" printed on the screen.